The extra burden on state-owned banks

It is well know that public sector banks are expected to do the heavy lifting when it comes to extending credit to neglected sectors. But poor credit management and lax appraisal at these banks mean that state-owned banks are carrying a disproportionate share of non-performing assets (NPAs), too, in their book.

As Reserve Bank of India deputy governor K.C. Chakrabarty pointed out recently, “new private sector banks and foreign banks were able to manage their asset quality better than PSBs (public sector banks) as they were quick in identifying NPAs, while PSBs resorted to retrospective restructuring to report lower NPAs initially." 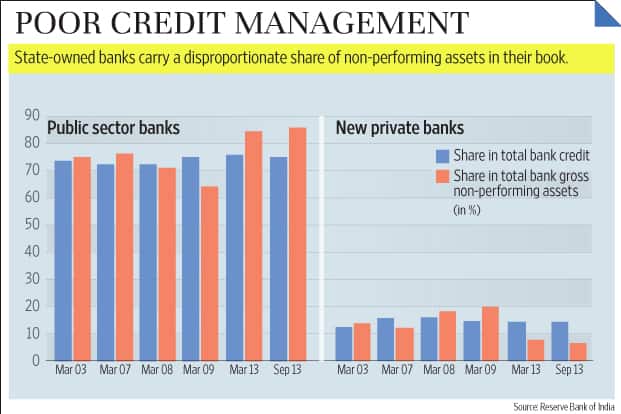 These bad loan numbers for state-owned banks would have been higher if not for the massive restructuring of loans they have undertaken in the past three years. Data compiled by Emkay Global Financial Services Ltd for 27 banks under their coverage shows that state-owned banks account for 93% of outstanding recast loans of ₹ 2.85 trillion.

The upshot: Ever-increasing amounts for provisioning mean that public sector banks’ profits are getting wiped out at a faster rate. In the September quarter, the collective net profit of listed private sector banks overtook that of state-owned banks for the first time in at least three years, if not more.