Suzlon Energy Ltd’s turnaround story continued for the third straight quarter, as it posted a net profit at the consolidated level, but concerns remain on its sustainability.

While the firm reported a net profit of ₹ 58.6 crore in the September quarter (against a loss in the year-ago period), the number was boosted by one-off income of ₹ 219 crore. That was due to a reversal of provisions made towards diminution in investment and profit on sale of investment.

Secondly, the company’s huge debt burden means that it has to shell out almost ₹ 300-350 crore every quarter towards interest expenses. So, while it posted earnings before interest and tax of ₹ 262 crore, it was dwarfed by interest payments of ₹ 357.6 crore. That said, Suzlon did post a 34% rise in revenue over a year ago. 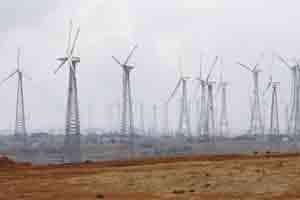 Suzlon’s management is confident that order inflow would be strong in the coming quarters despite a slowdown in the US and Europe, but things may not be that hunky-dory.

The Financial Timesreported that growth in China, the world’s largest wind turbine market, was slowing at a time of global overcapacity. Tax breaks in the US are about to expire. In India, a 10-year tax holiday and accelerated depreciation for wind power projects get over in March.

Still, the company says it has started reducing the debt on its balance sheet even as ₹ 2,000 crore of foreign currency convertible bonds come up for redemption next year. The stake sale in Hansen Transmissions International NV will help, as will squeezing out the minority shareholders of REpower Systems AG, which will allow it to access some ₹ 1,700 crore from the latter’s balance sheet. While that has allowed the stock to marginally outperform the BSE Power index this fiscal, order book growth and execution are what will sustain that trend.