Steady and boring versus mercurial and exciting

As the horns of a bull market get more visible, so is investor participation. A “myth" perpetuated over the years is that quality matters in a bear (flat) market, not in a bull market. In fact, the perception is that returns are inversely correlated to quality of the company as the market rises! The stronger the underlying market move, the greater it appears is the willingness of investors to accept companies with mediocre historical track records in the hope of a ‘great’ turnaround.

Do ‘quality’ companies outperform their more inconsistent peers during bull markets or are they consigned to generate all their long-term outperformance from periods of market declines? Should one change an equity portfolio to participate in changing market scenario, a horses for courses kind of portfolio strategy, or should one resolve to not succumb to temptation, irrespective of the returns being generated by non-quality stocks? Finally, what is quality—corporate governance, business profitability? Investors from time to time grapple with these questions. 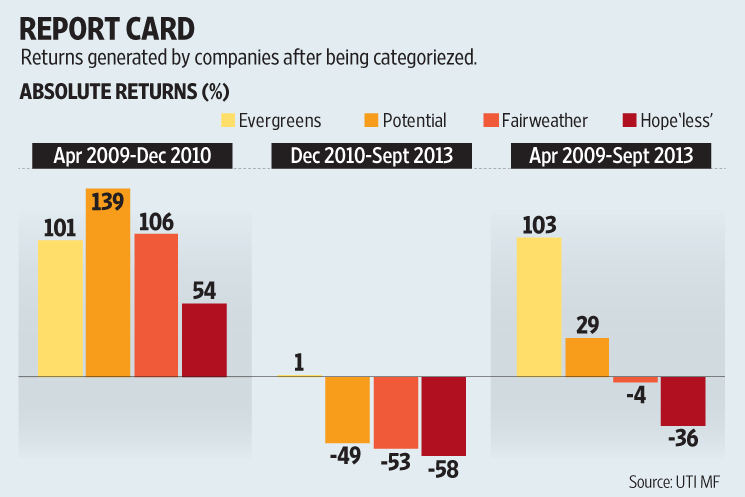 First, let’s define quality. Quality, for the purpose of this study, is defined as cash generated by the company from its operations (before capital expenditure) on a consistent basis. Operating cash flow (OCF) being defined as profit after tax (PAT) plus depreciation less change in working capital. Why OCF? Because it is a fairly good measure to ascertain a company’s ability to grow its sales without impairing its terms of trade, i.e., higher sales do not need to be forced by giving longer credit to distributors or building up inventories. As a rule, scaling of sales should be self financing; the plant and machinery required to generate the sales may be bank funded. Also, it does not penalize capital intensive industries. The consistency of generating OCF over a business cycle reflects a company’s inherent strength and the industry’s growth potential.

The second element is size and relevance. A cut-off level of ₹ 50 crore was chosen as the threshold level of reported PAT to eliminate smaller companies from the sample size. Then we searched for companies that generated positive OCF during the same period.

Third element is sample size. Over 500 companies that have been part of BSE 500 since January 2003 till March 2014, and even those that exited the index during this period, were part of the sample. Excluding banks and non-banking finance companies, a total sample of 466 companies were classified into four quadrants based on their consistency of generating OCF.

Fourth, for calculation of returns generated by each quadrant, the outliers—highest and lowest return generating companies, two in each quadrant—were ignored.

First, the slam dunk. As is well documented, after the boisterous 2003-08 bull market, post-2009 till September 2013, the tide turned in favour of companies generating consistent positive OCF (and PAT). The Evergreens and Potentials easily outpaced their peers in the Fairweather and Hope‘less’ quadrants. The Evergreen segment reported a 103%-plus return as against negative return of 36% by the Hope‘less’ segment during the four-year period starting April 2009.

Given the background of the global financial crisis, investors world over rediscovered companies that were generating free cash flows and required minimal capital dilution to fund growth. The same came to the fore in India as well. Investor preference, it seemed, had turned a full circle. Did the same strategy give similar returns during the 2003-08 bull market? The results were, surprisingly, similar. The Evergreen and Potential segments were able to outpace their peers in Fairweather and Hope‘less’ segments, though there was a period when the lower quadrant companies outperformed. Incidentally, this was the period immediately prior to the market decline! Leopards don’t change spots and mediocre companies rarely turn great. Investors, however, appear to believe in the contrary. Several studies in the US have shown that companies find it more difficult to convert themselves from an also-ran to an industry leader. The opposite, however, is more true and something investors need to guard against. Mediocre companies remain mediocre; it is only the business cycle that makes them attractive to investors.

Contrary to perception, investing in companies with consistent track records may seem like a boring investment style, but it tends to generate the highest sustainable returns over the longer term. Our study of top 500 companies since 2003 clearly shows the benefit of focusing on companies with more consistent track records rather than chasing companies with patchy track record in the hope of an eternal turnaround. This is a sound strategy even in a bull market. Alas, it’s difficult to practice. Additionally, high performing companies tend to have lower beta than their more inconsistent peers, which would make a portfolio less volatile. If the aim is to increase beta of one’s portfolio, limit adventurism to the third quadrant, i.e. companies that have reported a PAT of ₹ 50 crore or more and positive OCF for at least two of the preceding five years. Stay away from the Hope‘less’ segment, these are companies that are always in a perpetual turnaround mode, especially, during every bull market. Finally, prepare yourself for a full market cycle—bull market and its ensuing fall. Measure your returns over a complete cycle.