OTHERS : Mumbai: Indian benchmark indices BSE Sensex and NSE’s Nifty 50 gained on Friday ahead of a vote on the no-confidence motion tabled by opposition parties against the Narendra Modi government. In global markets, European stocks and US futures traded mixed, even after Asian equities reversed declines amid signs the Chinese central bank stepped in to stem weakness in the yuan. The Indian rupee recovered from its all-time low as state run banks sold dollars, Bloomberg reported. Here are the latest updates from the markets:

BSE Sensex closed higher by 145.14 points, or 0.40%, to 36,496.37, while the Nifty 50 rose 53.10 points, or 0.48%, to close at 11,010.20. BSE MIdCap and SmallCap rose 0.73% and 0.41%, respectively.Among the sectoral indices on BSE, IT, teck, telecom and healthcare rose over 1%. Basic materials, consumer discretionary goods and services, auto, metal and oil and gas declined. Sun Pharma, Infosys, Reliance Industries and Bajaj Finance were among the top gainers, whereas Bajaj Auto, Vedanta, BPCL and IOC were among the top losers.Meanwhile, foreign investors sold shares to the tune of Rs 315.69 crore on Thursday, local investors bought shares worth a net of Rs 470.02 crore, provisional data showed. 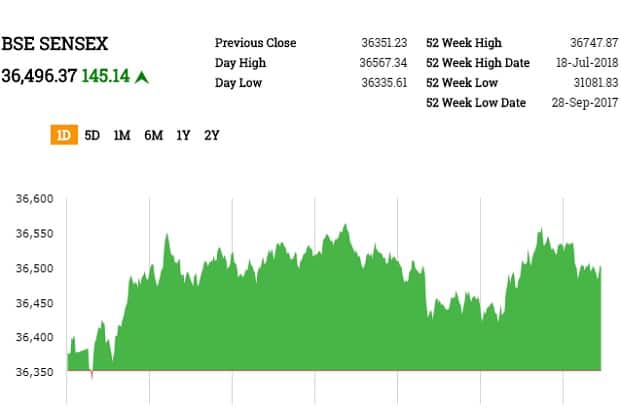 The Indian rupee recovered from its all time low as state run banks sold dollars, according to a Bloomberg report quoting two Mumbai-based traders. At 1.50pm, the rupee was trading at 68.89, up 0.20% from its previous close of 69.05. It opened at 68.97. Earlier in morning trade, the currency touched a fresh record low of 69.13 a dollar after China weakened the fixing yuan by the most since June 2016, just a day after cutting it beyond the 6.7 per dollar level, which was previously thought to be a key threshold. PBOC weakens yuan fixing by 0.9% to 6.7671 per dollar, weaker than average estimate of 6.7654.“Price action suggests that the RBI intervened via state banks and that has helped the rupee recover”, the Bloomberg report added. Asian currencies also reversed earlier declines triggered by China weakening the yuan’s daily fixing by the most in more than two years. The shift came after a sudden paring in the yuan’s drop, which spurred speculation of some type of intervention by Peoples Bank Of China.

HDFC Standard Life Insurance Company Ltd reported a profit of Rs380 crore for the quarter ended 30 June, compared to Rs 316 crore in a year ago quarter. Net premium income rose to Rs 5,001 crore in the quarter from Rs 3,662 crore last year. HDFC Life share rose as much as 1.6% to Rs 479.05.

Bajaj Auto Ltd slumped 5.26% to Rs 2949.05 after the company missed Street expectation in June quarter. The company reported a profit Rs1,115 crore in the June 2018 quarter, compared to a profit of Rs 924 crore last year, lower than Reuters consensus forecast for of Rs 1,247 crore. Total revenue from operations stood at Rs 7,419 crore, up from Rs 5,854 crore last year.

Vedanta Ltd shares fell as much as 3.62% to Rs 200.75. Vedanta chairman said that the company will incur a loss of $100 million if its Tuticorin smelter in Tamilnadu remained closed for one full year, reports ET Now. The Tamil Nadu government in May ordered its permanent closure in the wake of firing that killed 13 people protesting against the plant. Minutes after the government issued the order, Thoothukudi district collector Sandeep Nanduri sealed the Sterlite campus.

Ashok Leyland Ltd said that its West Africa unit has bagged its third project order for 147 buses valued $9.57 million. Ashok Leyland shares rose as much as 3.91% to Rs 110.05.

IT stocks rally as rupee trades near record low

Shares of information technology companies advanced as the Indian rupee hit a fresh record low in early trade, triggered by China weakening the yuan’s daily fixing by the most in more than two years. The Nifty IT Index rose nearly 2% led by Infosys, Tech Mahindra and HCL Tech. Bajaj Finance Ltd shares jumped 6.77% to Rs 2,488.65. The company reported a 69% surge in net profit on the back of a 42% rise in core income for the quarter ended June. The company’s main consumer lending business grew 35%, loans to small business rose 42%, rural business increased at a breakneck speed of 75% and even the mortgage business, newly housed under a separate subsidiary, gained 27% in the quarter. Read more Rupee recovers from record low against US dollar

The Indian rupee along with Asian currencies reversed earlier declines on Friday triggered by China weakening the yuan’s daily fixing by the most in more than two years. The shift came after a sudden paring in the yuan’s drop, which spurred speculation of some type of intervention by Peoples Bank Of China, Bloomberg reported. At 9.45am, the rupee was trading at 68.97, up 0.13% from its previous close of 69.05. It opened at 68.97.

Today is an important day in our Parliamentary democracy. I am sure my fellow MP colleagues will rise to the occasion and ensure a constructive, comprehensive & disruption free debate. We owe this to the people & the makers of our Constitution. India will be watching us closely.

Alembic Pharma shares rise 2% on receipt of EIR from USFDA

Shares of Alembic Pharmaceuticals Ltd rose 2% to Rs 523 after the company said it got EIR from USFDA for API facility at Karakhadi, Gujarat. All plants of the drugmaker are now FDA compliant.

The Indian rupee plunged further to hit a fresh record low against the US dollar as Asian currencies fell following China’s decision to depreciate yuan the most in two years. The rupee opened at 68.97 a dollar and touched a fresh low of 69.13 a dollar. At 9.15am, the rupee was trading at 69.09, down 0.07% from its previous close of 69.05.China weakened the fixing by the most since June 2016, just a day after cutting it beyond the 6.7 per dollar level, which was previously thought to be a key threshold. PBOC weakens yuan fixing by 0.9% to 6.7671 per dollar, weaker than average estimate of 6.7654.

Senior leaders and parliamentarians of the BJP said Prime Minister Narendra Modi is expected to lead the response of the Union government against the charges made by Congress-led opposition parties.

BJP set to use no-trust motion debate as launch pad for 2019 election https://t.co/4QtondlWfe

■ US stocks fell on Thursday amid criticism of the Federal Reserve by President Donald Trump. A decline in bank shares also pushed the broader market down. Asian shares were muted on the last trading day of the week as investors searched for direction after stocks stateside slipped amid U.S. President Donald Trump’s criticism of the Federal Reserve, while the dollar eased from a one-year high.■ Bharti Airtel Ltd is looking to slash its debt by half over the next 18 months by raising a total of ₹56,000 crore from the sale of a stake in its African unit and a phased sale of its holding in the entity created by the merger of Indus Towers and Bharti Infratel Ltd.■ Infosys scrambles to find buyers for the Israeli automation technology firm that is now valued at less than half the price Infosys paid for it.■ The telecom regulator has asked operators to adopt blockchain technology to ensure only registered telemarketers have access to phone databases and that user consent to receive such communication is explicitly recorded.■ JSW Cement, a privately held company within Sajjan Jindal’s JSW Group, announced investments of $150 million to set up a 1 million tonne per annum (mtpa) clinker unit in Fujairah, UAE. ■ Novartis AG agreed to buy the rights to a skin-disease drug from developers Galapagos NV and MorphoSys AG in a deal that could reach $1 billion as Chief Executive Officer Vas Narasimhan centers the Swiss drugmaker on developing innovative prescription medicines.■ The National Company Law Tribunal (NCLT) has approved the bid of AION Capital-JSW Steel to acquire Monnet Ispat & Energy Ltd, providing major relief to the consortium.■ State-owned fuel retailers Indian Oil Co. Ltd and Bharat Petroleum Corp. Ltd as well as the Adani group were the top bidders for gas retailing licences in the country’s biggest city gas distribution auction.■ The Asian Development Bank upgraded its inflation projection for India to 5% from 4.6% earlier for 2018-19 blaming higher oil prices, depreciation of the Indian rupee and hike in minimum support prices.■ The Indian rupee on Thursday weakened past the 69-mark against US dollar, tracking losses in its Asian peers after Chinese yuan fell to a one year low. ■ Kotak Mahindra Bank Ltd said its net profit for the June quarter rose 12.3% from a year ago helped by higher net interest income and other income. Standalone net profit for the first quarter stood at Rs 1,024.94 crore against Rs 912.73 crore a year ago. ■ Earnings corner: Bajaj Auto, Bata India, Ceat Ltd, Havells India, HDFC Life, Kansai Nerolac and Wipro are among the companies that will be announcing their June quarter earnings today.