OTHERS : Mumbai: Indian benchmark indices BSE Sensex and NSE’s Nifty 50 declined on Tuesday, breaking a six-day winning streak, ahead of the outcome of the Reserve Bank of India’s monetary policy review meeting tomorrow. Analysts believe the RBI decision may be a non-event on the key rate front, but the focus will be on RBI’s communication and stance. Investors turned cautious amid negative cues from global markets and ahead of state election results next week that may set the tone for the 2019 general elections. Finance stocks such as HDFC, HDFC Bank and SBI contributed most to the Sensex losses, offsetting gains in IT stocks Infosys, TCS and Wipro. Sun Pharma shares erased their morning gains and close nearly 3% down.In global markets, stock markets across Europe and Asia declined along with US equity futures as investors reined in their optimism over any breakthrough in the trade war. Oil prices rose over 1%, extending gains ahead of expected output cuts by producer cartel OPEC and a mandated reduction in Canadian supply. Here are the latest updates from the markets: OPEC works on deal to cut output, still needs Russia on board

OPEC and its allies are working towards a deal to reduce oil output by at least 1.3 million barrels per day, four sources said, adding that Russia’s resistance to a significant production cut was so far the main stumbling block. OPEC meets on Thursday in Vienna, followed by talks with allies such as Russia on Friday, amid a drop in crude prices caused by global economic weakness and concerns about an oil glut due largely to a rise in U.S. production. Read more

A demand for residential real estate is likely to revive in the medium term on the bank of an improvement in end-user participation on rising affordability, increasing launch of units with mid-income ticket sizes, and implementation of the RERA Act, 2016, said Crisil in a report. It added that resolution of NBFC liquidity issues will be key to the demand revival.“Between fiscals 2019 and 2021, residential demand is estimated to log a compound annual growth rate of ~4% led by key micro markets of Bengaluru, Hyderabad and MMR. Though marginal, the growth will be driven by first time buyers eyeing units in mid-income tickets typically priced between Rs 2.5 mn to Rs 10 mn,” said Rahul Prithiani, director, CRISIL Research. 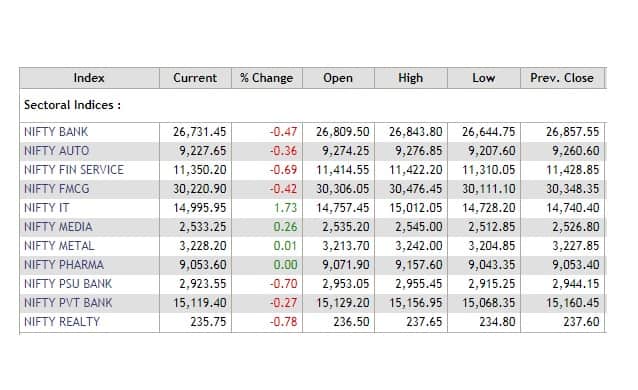 RBI has less reason now to hike interest rates. But the key factor that could play truant is the government's fiscal path. Fiscal deficit has already crossed the full-year target in October, writes @aparnaviyer02 https://t.co/dtAvNTRjUT

HCL Tech shares up 2% on contract with Barclays

Shares of HCL Technologies rose as much as 2.2% to Rs 1041 per share. The company announced that it has expanded its strategic partnership with Barclays. As part of the deal, approximately 460 Barclays employees in its Operations Center in Lithuania will transfer to HCL.

Are oil prices on the boil again?

Should the sudden increase in oil rates ignite hopes of a rebound in crude prices? Much will depend on what the Opec, and its friends, decide at its meetings on 6-7 December writes @PallaviPengonda https://t.co/WKg8vm6oKd

Oil prices rose nearly 1%, extending bigger gains from the previous day amid expected OPEC-led supply cuts and a mandated reduction in Canadian output. U.S. West Texas Intermediate (WTI) crude futures were at $53.33 per barrel at 0604 GMT, up 48 cents, or 0.7 percent, from their last close. International Brent crude oil futures were up 51 cents, or 0.8 percent, at $62.20 per barrel. Both crude benchmarks climbed by around 4 percent the previous session after Washington and Beijing agreed a truce in their trade disputes and said they would negotiate for 90 days before taking any further action. The Middle East-dominated Organization of the Petroleum Exporting Countries (OPEC) will on Dec. 6 meet at its headquarters in Vienna, Austria, to agree a joint output policy. OPEC will also discuss policy with non-OPEC production giant Russia. Reuters Shares of Reliance Communications Ltd rose as much as 8% to Rs 17.95 per share after the company informed stock exchanges that its arm Reliance Realty has submitted the corporate guarantee of Rs 1,400 crore to the Department of Telecommunications (DoT). Shares of Sun Pharmaceuticals Industries Ltd rose as much as 2.06% to Rs 464.70 per share after the company highlighted that there was no wrong doing and gave clarity on the recent queries raised on the company. The company’s founder Dilip Shanghvi said that the points raised in the sales note pertained to information which was sourced from public domain.

Yes Bank gained as much as 2.5% to Rs 182.50 per share. Yes Bank on Monday appointed former IRDAI chief T.S. Vijayan as an independent director for five years.

Rupee trades flat against US dollar

The HUL-GSK merger deal will lead to dilution of Unilever Plc's holding in Hindustan Unilever from 67.2% to 61.9%. https://t.co/SkpOuIxfq8

Oil prices rose, extending strong gains from the previous day amid expected OPEC-led supply cuts and a mandated reduction in Canadian output. The 90-day truce in the trade dispute between the United States and China was also still supporting markets, traders said. U.S. West Texas Intermediate (WTI) crude futures were at $53.35 per barrel at 0137 GMT, up 40 cents, or 0.8 percent, from their last close. International Brent crude oil futures were up 40 cents, or 0.7 percent, at $62.09 per barrel.Gold prices held firm early on Tuesday, having hit a more than three-week high in the previous session, as the dollar stumbled after the United States and China agreed to a temporary truce in their trade conflict. Spot gold was up 0.1 percent at $1,232.20 per ounce at 0121 GMT. Prices touched a peak of $1,234.87 on Monday, their highest since Nov. 7. U.S. gold futures were down 0.1 percent at $1,238.2 per ounce.Metals: Copper and most other base metals gave up some of Monday’s gains in early Asian trade, as doubts over whether China and the United States will be able to resolve their trade row within a 90-day timeframe came into focus. Three-month LME copper slipped 0.5% to $6,265 a tonne, after rising 1.6 percent in the previous session. The most-traded January copper contract in Shanghai fell 0.3 percent to 49,850 yuan ($7,245.01) a tonne. Shanghai zinc and tin , and London lead and nickel all edged higher. Reuters

Asian stocks fell with American futures on Tuesday after confusing signals over U.S.-China trade talks. The inversion of a portion of the Treasury yield curve for the first time since 2007 reinforced the impression that markets are approaching the end of the current cycle. Stocks dropped in Japan, Korea and Australia and fluctuated in China, while the yen advanced and Treasuries edged up. Media appearances Monday with Trump administration officials shed little light on the specifics of how Sino-American trade negotiations will progress. Though the S&P 500 Index closed higher on the suspension of tariff escalation, futures retreated Tuesday.The MSCI Asia Pacific Index fell 0.4 percent as of 10:47 a.m. Tokyo time. Japan’s Topix Index fell 0.8 percent. Hang Seng fell 0.2 percent. The S&P/ASX 200 fell 0.6 percent. Shanghai Composite was little changed. The S&P 500 gained 1.1 percent while the Nasdaq Composite Index rose 1.5 percent. Bloomberg