Bangalore: At a time when start-ups saw a 70% decline in investments by venture capital firms in the first half of 2009, IT (information technology) product companies were sitting pretty.

Investments in this segment increased 50% over the previous year though the number of deals fell. 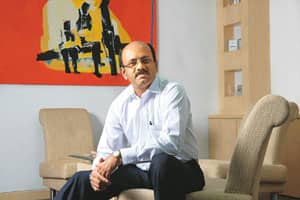 Home advantage: Subash Menon, CEO of Subex, one of India’s earliest IT product firms, says there is a ready domestic market for start-ups. Hemant Mishra / Mint

Product companies have remained on the margins of India’s famed IT sector, attracting few investors primarily because of the difficulty in gauging their potential. Besides, even successful products such as Microsoft Corp.’s Windows operating system need constant updating.

The revenue cycle for such firms is a typical S-curve, where returns are maximum after five or more years following a steep climb.

Investors say there are now a number of reasons for the new-found attraction to these firms.

For one, annual revenue for the Indian software product segment is expected to jump to $9.5-12 billion by 2014-15 from $1.4 billion in 2007-08, according to Nasscom, the country’s top software industry lobby.

And over the past two-three years, Indian product firms have been successful in breaking barriers in overseas markets. Many IT product companies are able to cater to the US market without hiring people there or opening offices, says Sharad Sharma, chairman of Nasscom product forum.

Subex, one of India’s earliest IT product companies and a listed firm, has products for cost management, interconnect billing, credit risk management and revenue assurance, among others.

Product companies also have the advantage of being high gross margin businesses that scale non-linearly. It means that they can turn out to be very profitable businesses over time, says Samir Kumar, managing director of Inventus Capital Partners, which made its first IT product investment this year.

Another factor in favour of product companies is that IT services companies, a favourite with VCs, are facing a severe revenue crunch. Due to the downturn, these companies are forced to contain costs, which, in turn, has compelled them to roll back their growth plans.

“Even if they start generating revenues like before, when the market gets better and they do go back to their expansion plans, costs will shoot up for them. It’s a double whammy. Their revenues will be under stress," says T.C. Meenakshisundaram, founder and managing director of IDG Ventures India, one of the most prominent backers of product companies in the country.

Another factor is the loss of interest in outsourcing firms, which dominated tech investments the past two-three years. “Ever since the dollar debacle in 2007 and the economic crisis that hit the world in 2008, outsourcing is no longer hot, at least from the perspective of medium-stage investment," says Arun Natarajan, CEO of Venture Intelligence. “Product is definitely favourable."

Typically, investments in product firms are considered riskier than in IT services firms because of the nature of their business of innovation. Also, the viability of an IT product cannot be gauged easily without a ready market.

But then, the return expectations for product companies are 10 times the investment, against five-six times for services firms.

And for exits, product companies are a better bet for investors with horizons expected between three and five years, compared with between five and seven years for services companies.

It’s still not an easy journey for Indian IT product start-ups. Long gestation periods, lack of skilled manpower and scepticism are common hindrances. Nasscom’s Sharma says many product companies have till now been stuck in what he calls the “idea-to-product level" phase.

The biggest challenge now lies in crossing the hump from product to market. In order to overcome that, Nasscom has started showcasing bright fledgling firms at various avenues.

There are other ingrained difficulties as well for product firms. India is not yet known for its IT products as it is for its software and IT services. “It’s imperative that a company, particularly if it’s dealing with an overseas client, that its offering should not get into hiccups in the first usage. This can put off future clients," says IDG’s Meenakshisundaram.

Another hurdle for these companies in getting funding is a shift in the attitude of venture capital firms, which are now looking at non-tech companies as well. “Bottomline is that big VCs like Sequoia, Helion, Matrix and Mayfield are moving away from technology. They are not focused on technology any more," says Venture Intelligence’s Natarajan.

Alok Mittal, a general partner at venture capital firm Canaan Partners, says many Indian product companies are developing products that may not find takers in the developed world. For example, products for Internet connectivity may not find a vibrant market in the US, but South Africa could be huge.

“Our focus is on the emerging markets," he says.