Home >Money >Personal-finance >Your mobile is now your bank: Keep the data and the phone safe

Your mobile is now your bank: Keep the data and the phone safe

An advertisement that was aired recently had cricketer Mahendra Singh Dhoni tell a bridegroom that he can get an instant personal loan using a financial services company’s mobile app. That tale represent in large measure what happened in the banking industry in 2017. Banks made a big push to reach customers through their mobile phones.

“The mobile device has become stronger. We are seeing mobile banking channels getting stronger than the traditional desktop channel. Hence, now we are looking at product design from a mobile phone point of view. The largest share in mobile transactions has been for fund transfers where NEFT (National Electronic Fund Transfer), IMPS (Immediate Payment System) and UPI (Unified Payments Interface) have grown the most," said Praveen Bhatt, head-digital banking and customer experience, Axis Bank Ltd.

Last year’s demonetization and the government’s thrust to the Digital India initiative after that, led banks to sing the mobile banking tune. Financial institutions looked to provide not just payments on digital platforms but also credit. Here is a look at what changed for the customers and whether the change was for the customers’ good. 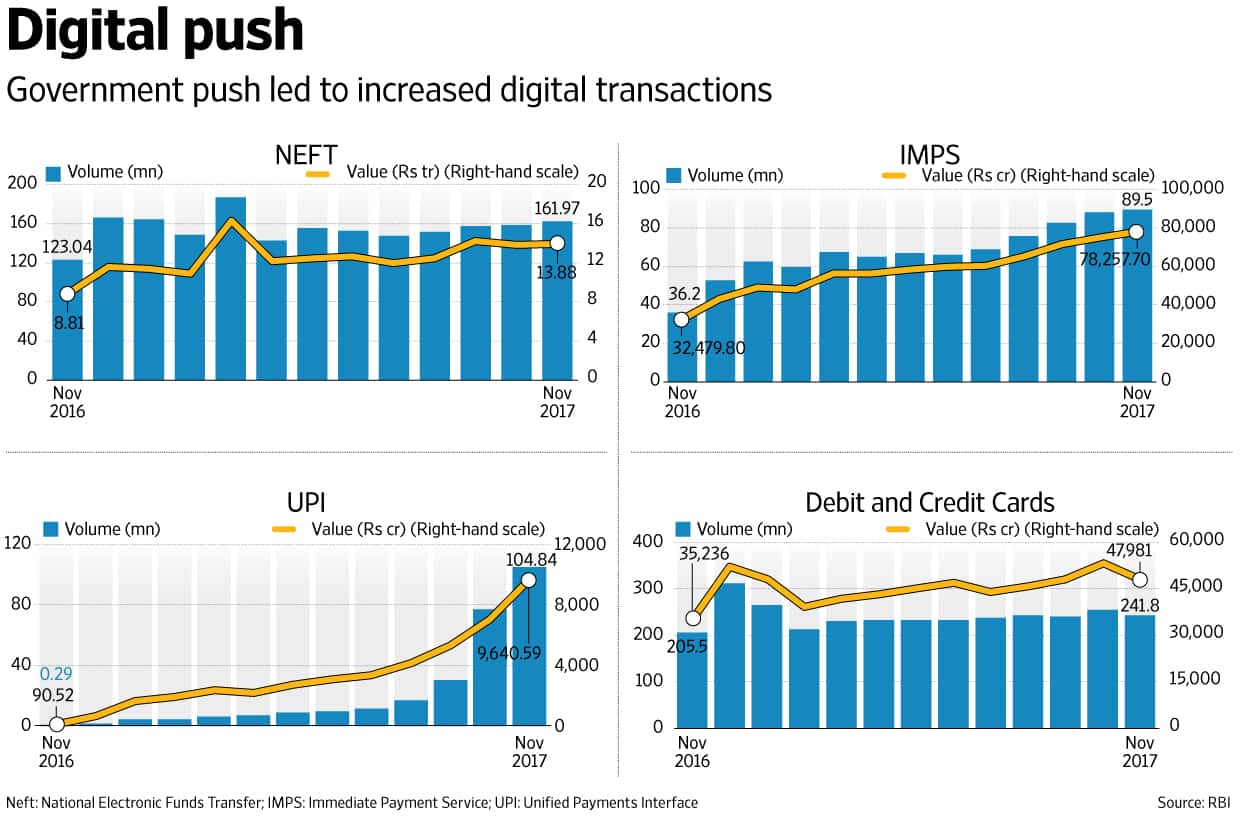 Payments: Payments made the loudest noise in banking and the fintech industry in 2017. The end of 2016 saw the launch of UPI and Bharat QR, which changed the payments landscape, making businesses rethink their payment business strategies. The government’s push led banks to build products around UPI and Bharat QR. According to National Payments Corporation of India (NPCI), in November 2017, 61 banks were live on UPI with a transaction value at Rs9,679 crore compared with 30 banks and Rs100 crore transaction value in November 2016.

This also changed the way e-wallet companies looked at their payments business. Along with fintech and banks, this year, global companies such as Google, Truecaller and Samsung Pay entered payments through UPI. Clearly, for customers it meant easier access to mobile-based digital payments, and banks have had to change their strategy. “After Google came in, a whole new set of customers came. Banks can no more remain closed. Now we are open to give our APIs (application programming interface) out," said Bhatt.

Retail customers, however, gained from lower interest rates on home loans. While the marginal cost of funds-based lending rate (MCLR) regime came into effect in April 2016, it was only this year that interest rate on home loans came down to about 8.35% per annum. However, the banking regulator is not happy with the pace of transmission of interest rates and is looking at bringing in a new benchmark lending rate.

Lending and remittance: A slowdown in corporate lending business and slow growth in home loan segments pushed banks to open up their unsecured lending business. This meant that banks placed personal loans and credit cards faster in consumers’ hands than ever before. With the help of alternative data, fintech companies launched small credit and cash advances on their platforms. This encouraged major banks such as ICICI Bank Ltd (with Paytm) to enter the small credit segment. “Based on the transactions that a customer does and knowing her behaviour with the bank, we give small credit. We are being cautious and not going overboard. Not just Paytm, we will try to replicate the same model with various other companies. The next phase will be to open up for non-bank customers (as well)," said Madhivanan Balakrishnan, chief technology and digital officer, ICICI Bank Ltd.

Big banks’ focus on alternative data and small credit is also in response to the changing demands of customers. “Earlier, we used to compare with the apps of other banks. Now consumers are forcing us to compare ourselves not just within the industry but outside as well. It is now common for a consumer to compare a transaction at an e-commerce platform with a transaction in a bank app. We have been wondering if that is a fair battle but we have now given up on it. This is a big change for the banks as a whole," said Bhatt.

Data security: With a lot of personal data available on online platforms, it is clear that you will see more of your digital data being used for financial products and services. Financial institutions say they need to do more to understand a customer based on her payments data to cross-sell products such as credit cards and personal loans, and eventually long-term loans such as mortgages. With the young demography, banks are able to do this to an extent. “It is a young customer profile—87% of our customers are less than 30 years (of age). All of them have Aadhaar, PAN and smartphone," said Shantanu Sengupta, managing director and head-consumer banking, DBS Bank India.

This also means that you as a customer need to be careful who and what you give your consent for. Easy access to your data, in the wrong hands, can also expose your money to frauds and identity theft.

Bankers say that customers are asking for more simplicity and faster turnaround time for banking transactions and services. “The biggest change happened in payments and remittances in 2017 in the form of PoS solution on mobile phones and UPI transactions due to the government’s push and new companies entering the segment," said Balakrishnan. With increased mobile phone connectivity—it has crossed 1 billion—banks are going to continue to focus on everyone who has a mobile phone. The financial institutions, while focusing on your mobile phone, are also using your data to consider you for credit. This also means you need to be careful who you give consent to access your personal data. Next, you will see a lot more of your finances data being collated and analysed. The year 2017 may be considered as the period when banks took baby steps in mobile banking. But brace yourself for a faster pace and a bigger impact in the coming year.