Pharmaceuticals: US generics fail to deliver

The pharmaceutical sector’s run of poor performances continued in the March quarter as companies found the going getting tougher in the US generic market. The Indian market has recovered after the November demonetisation of high-value banknotes, but was not enough to compensate for the weakness in the US.

Pricing pressure in the US market is going from bad to worse, said companies. Consolidation of the medicine distribution channels has given them better bargaining power over the companies who supply drugs. In addition, as more generics enter the market, prices have more reason to decline.

Indian companies that have pending compliance issues after inspections by the US Food and Drug Administration (USFDA) have it worse. The non-compliance has put on hold approvals of drugs manufactured at these plants. Even where there are no compliance issues, companies are finding that the approval process has lengthened. 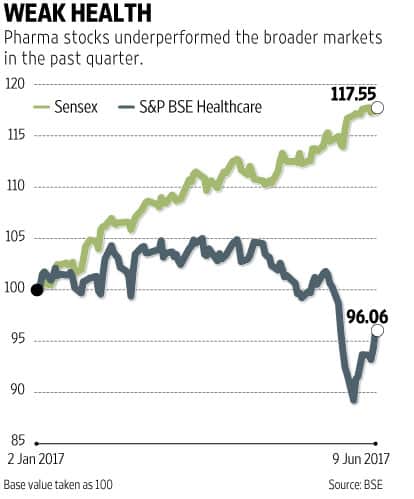 The pharmaceutical industry’s sales declined by 1.1% in the March quarter from a year ago and operating profit margin declined by 5 percentage points. Since the US market is the more profitable one, weakness there adversely affected the sales mix. Companies have continued to invest more behind research and development (R&D), in a bid to move up the value chain. That has led to R&D expenses increasing as a percentage of sales. Employee costs increased as well. All these factors contributed to the decline in margins.

The results disappointed investors which led to the BSE Healthcare Index declining by 8% since April, even after recovering from its low levels.

In FY18, companies expect the pricing pressure in the US market to continue and some near-term disruption from the goods and services tax roll-out starting on 1 July.

The key triggers to watch out would be companies getting a green signal from USFDA for their affected plants or getting key product approvals for the US market.