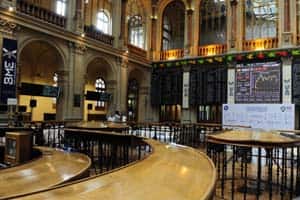 “European markets are still in a very fatalistic mood because of Greece and possible contagion," said Lex van Dam, hedge fund manager at Hampstead Capital, which manages $500 million of assets.

“My view is that it is very likely that the ECB will step in before the situation spirals out of control."

Investor sentiment was dealt a blow by Moody’s move on Thursday to cut the long-term debt and deposit ratings of 16 Spanish banks, including the euro zone’s largest, Banco Santander.

Fitch, meanwhile, slashed Greece’s credit rating to CCC from B-minus on Thursday to reflect the heightened risk that the country might have to leave the euro zone.

The failure by Greek politicians to form a government underscores a lack of public and political support for an austerity programme, Fitch said in a statement.

More positive news came in the form of a poll showing Greek voters are returning to the establishment parties that negotiated its bailout, offering potential salvation for European leaders who say a snap Greek election next month will decide whether it must quit the euro.

“If the drift of the electorate shifts towards the establishment parties, we’re looking at a Greece that’s not looking to leave the euro zone for a start, and we’re looking at political leaders that recognise what has to be done," Mike Lenhoff, chief strategist at Brewin Dolphin, said.

“Given the severity of the oversold position, this could be just about the right time for something potentially promising like this to come along and help turn the markets around."

Banking stocks staged a recovery, trading flat after a sell-off in opening trade, as talk of a ban on naked short-selling of Spanish banking stocks did the rounds, though traders said any long-term effects of such bans tended to be limited.

“If you remember in 2008 when they banned short selling on banks in Europe, the next day they still all dropped. It’s a diversionary tactic," Ed Woolfitt, head of trading at Galvan, said.

“The fact is fear will still see the bank stocks sold regardless as to whether you can go naked short or not."

Mining stocks heaped pressure on the FTSEurofirst 300, as the euro zone debt jitters added to worries about the global economy following recent discouraging data out of the US and China.