Gear up for supply chain disruption after GST implementation

In the run-up to the implementation of the Goods and Service Tax (GST), distributors and wholesalers in various sectors could be tempted to de-stock, in a bid to avoid losses on the tax credit front. Since product-wise GST rates will be finalized at the end of June, concerns over potential losses arising from mismatch between tax payout and tax refund once GST is in place, has led to traders reducing stock-in-trade.

Media reports state that de-stocking has already begun in the pharmaceutical sector, where some stockists have started maintaining low stock levels and some others have begun returning a big chunk of their stocks to companies.

Secondly, the GST Council has guided for lower tax on items of mass consumption such as spices, tea and mustard oil. This means certain items of this category may attract lower taxes in the GST regime than currently levied on them, thus presenting a case for holding lower stock levels of such goods. 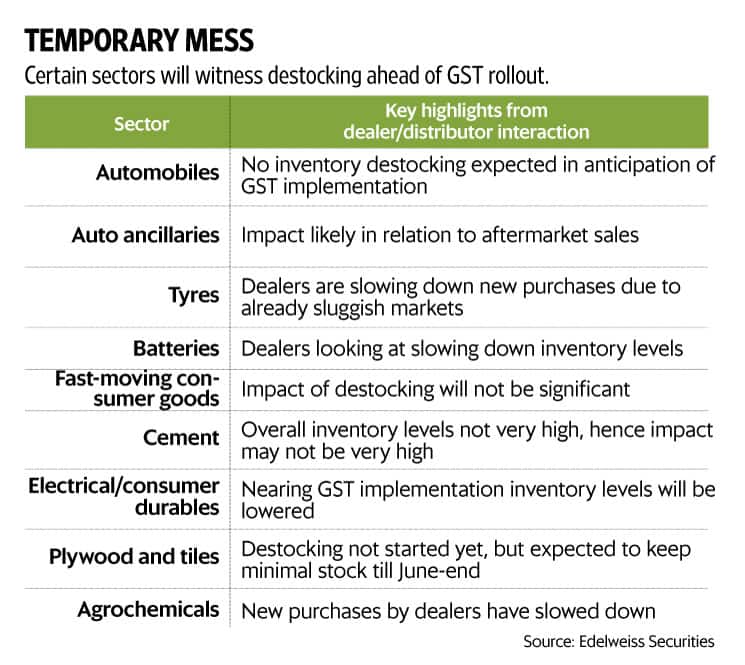 Apart from these factors, transition difficulties in getting excise set-off on inventory have the potential to create disturbances in the supply chain. So, one should brace for de-stocking as the deadline inches closer, caution tax experts.

Though intermittent and temporary in nature, there will be disruption for sure. It is expected to begin from the business to business (B2B) segment and trickle down to the business to consumer segment (B2C).

“According to us, SMEs and MSMES will feel more heat because many of these small and medium-sized players have banking arrangements that mandate them to maintain a certain quantum of stock as security. They may be caught between meeting loan pre-requisites and claiming input credit tax. So, there could be an initial disruption in the B2B segment on launch," said Preeti Khurana, chief editor, ClearTax.com.

Also Read: GST: Rising cost of compliance to hurt SMEs the most

“Few cement dealers highlighted that closer to July 1, they will keep minimal inventory. Dedicated/sole dealers of large companies will not see any impact as they do not maintain any inventory. Tyre companies are trying to push sales via offers and discounts. Cash sales have been impacted by government’s cash limit rule of Rs2 lakh. The June quarter will be a slow-growth quarter for agro chemical companies," the Edelweiss report said.

After interacting with dealers and distributors across sectors, the brokerage firm found that lack of planning among the community, difficulty in understanding tax laws and problems relating to e-filing have led to near-term uncertainty.

This disruption on the ground is bound to spill over to balance sheets. A dent on margins cannot be ruled out especially for those sectors where the first quarter is a seasonally weak one. Some impact on earnings is anticipated for consumer companies in the first quarter of FY18, although it is too early to quantify it.