Thanks for Visiting Mint
You seem to have an Ad Blocker on. Please turn it off in order to continue, or whitelist Mint
HOW TO TURN OFF AD BLOCKER
OR
REFRESH IF YOU ALREADY TURNED OFF THE AD BLOCKER
Home >Market >Stock-market-news >BSE Sensex, Nifty cool off record highs after six-session rally

Mumbai: Stock markets took a breather after a six-session dizzying rally, with benchmark indices Sensex and Nifty skidding from their closing peaks after emergence of sell-off in recent high-flying counters.

The investor sentiment was majorly driven by under-pressure banking stocks, which had recently seen sharp run-up in valuation, as the market was concerned over the government’s move to allocate higher capital to weaker banks. 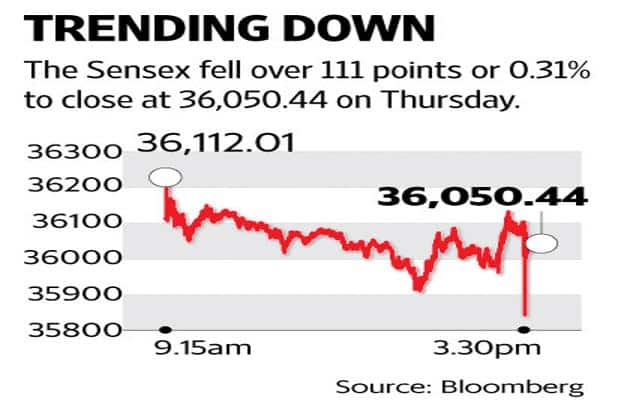 Among the Sensex constituents, State Bank of India was in red, tumbling the most by about 5% a day after the government said it will inject Rs88,139 crore capital in 20 public sector banks (PSBs) before March.

Other state-run lenders Punjab National Bank and Bank of Baroda also retreated by up to 7.07%. Overall sentiment was cautious as investors were on a wait-and-watch mode ahead of the Union Budget on 1 February and a long weekend, as markets will remain shut on Friday on account of Republic Day.

Investors were concerned over surging global crude prices, which climbed to over three-year highs to trade at $71 a barrel, and negatively impacted sentiments, traders said. Traders described Thursday’s fall as a technical correction, as markets were in an “over-bought" position as stock valuations were stretched, spurred by encouraging quarterly earnings of some bluechip companies and unabated foreign fund inflows.