TCS reported a mere 1% sequential revenue growth in constant currency terms for the September quarter, far lower than the 2.5% growth the Street had estimated

Indian IT companies have struggled for growth for quite some time now. Growth of top-tier IT companies fell to around 9% in the June quarter, compared to a near-term peak of 14%, according to analysts at Nomura Research.

But things are turning worse. Tata Consultancy Services Ltd (TCS) reported a mere 1% sequential growth in constant currency terms for the September quarter, far lower than the 2.5% growth the Street had estimated. On a year-on-year basis, growth stood at 7% in constant currency, a steep drop from the 10.1% growth reported by the company in the June quarter.

About a month ago, TCS said in a filing with exchanges that some of its customers— particularly in the banking, financial services and insurance (BFSI) vertical—are holding back on discretionary spending. While this was expected to impact growth, no one had anticipated growth of merely 1% compared to the June quarter. As it turns out, revenues from the BFSI segment grew 1.2% last quarter, which means other verticals had struggles too. 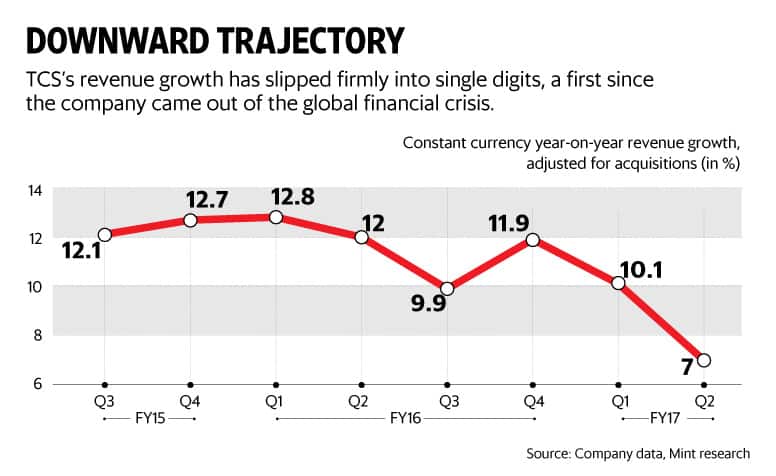 TCS said revenues from the retail vertical declined, besides which postponement of work in its India business led to sluggishness in overall revenues. While it’s true that some other verticals did better with growth of 3-4%, what matters in the end is the growth of the entire portfolio. And investors will evidently be disappointed with what they see.

TCS shares are expected to fall when trading resumes on Friday, according to analysts, although since the stock has already underperformed peers since its growth warning last month, the fall may be limited to some extent.

Just before the warning, TCS shares traded at a 19% premium to Infosys shares; the premium is now down to less than 4%. This premium too may disappear on Friday, unless, of course, Infosys’s results announcement is equally disappointing.

TCS’s margins improved by around 90 basis points (bps) sequentially, higher than analysts’ expectations of an improvement of around 50 bps. But that’s hardly something to be excited about at a time when growth is faltering. Note that employee costs fell by more than 70 bps, boosting gross margins. It appears that variable pay has come down on an overall basis, with growth possibly being short of even internal expectations.

In any case, it’s always difficult to maintain margins when growth is slow. Unfortunately for investors, there’s no clear handle on when growth will revive. The company sounded confident about near-term demand based on its interactions with its customers and projects in hand, although it added that it’s difficult to predict how the macroeconomic situation plays out.

JPMorgan’s analysts said in a 5 October note to clients that it’s unsurprising that growth is lower than previous years, “given the multiple structural and cyclical/time-bound headwinds hitting the sector in conjunction today".

They list as many as 12 challenges the sector is facing, including commoditization of the legacy business, which is leading to price and volume pressures; increased competition from multinational firms such as Accenture Plc and Capgemini SA; and a rise in the number and size of captive centres. And all of this is happening at a time when spending by BFS industry has ebbed.

The manner in which TCS’s growth rate has fallen in the past few quarters, it’s clear that the industry is currently facing more challenges than it can handle.