Aviation: Jet Airways has a bumpy landing in the December quarter

While IndiGo airlines and SpiceJet performed well in the December quarter, the results of Jet Airways weren't too impressive

Indian aviation companies were expected to have a comfortable flight during the December quarter. For one, a favourable base effect owing to demonetisation in the December 2016 quarter was expected to help. In that backdrop, InterGlobe Aviation Ltd (that runs the IndiGo airline) and SpiceJet Ltd performed well, but the results of Jet Airways (India) Ltd weren’t too impressive.

Jet’s stand-alone reported pre-tax and exceptional profit for the December quarter stood at Rs165 crore. Profits were driven to a great extent by “other income" of Rs263 crore. One reason for Jet’s weaker profitability was owing to lower yields (pricing), whereas both IndiGo and SpiceJet reported a year-on-year (y-o-y) increase in this yardstick. As pointed out by Edelweiss Securities Ltd, IndiGo and SpiceJet’s yields increased about 6% and 10%, respectively, while Jet’s yields declined by 3%. 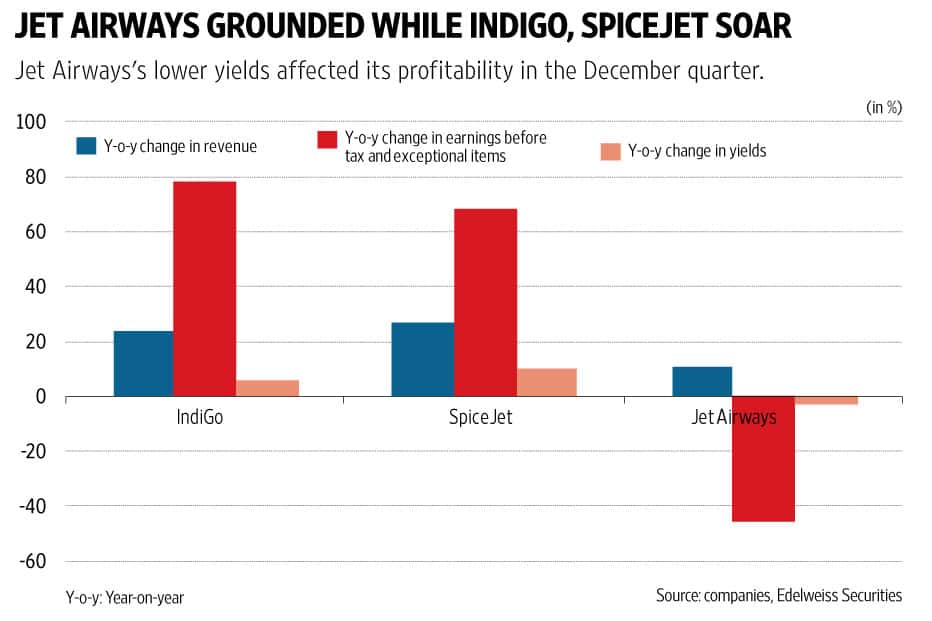 Further, Jet’s international business has been under pressure for a while now and the December quarter results brought no respite. The Gulf markets specifically have been a pain point. Still, so far this fiscal year, Jet’s shares have skyrocketed about as much as 60% from its closing low in May. Hopes are high that the company’s strategic initiatives will bear good fruit. Jet plans to cut its non-fuel cost per available seat kilometre (or Cask) by 12-15% by fiscal 2020 and use those savings to pare debt. Investors would watch that closely, considering finance costs erode operating profits substantially.

In general, domestic passenger growth has been decent. Passengers carried by domestic airlines during 2017 increased 17.3% y-o-y, according to data from the Directorate General of Civil Aviation. Growth in January stood at 20%. The worry, however, is higher crude prices. How pricing shapes up will be a key factor to follow as far as profit margins are concerned and the outlook for these stocks, which haven’t flown particularly high in 2018 yet.

For IndiGo, engine related issues pertaining to the A320 Neo aircrafts are a concern. “In the past few years, engine-related issues have affected IndiGo’s capacity addition plans, resulting in market share loss (100 basis points down in December 2017), though the company has received adequate support and compensation from the suppliers," wrote analysts from SBICAP Securities Ltd on 12 February.

For SpiceJet, apart from the impact of fuel prices, how the regional thrust is ramping up needs to be monitored. For Jet, progress on the cost reduction efforts will be a key factor to watch.