Sunny greetings from the Gadhias

Sunny greetings from the Gadhias

Mumbai: Circa 1984, Amsterdam. A group of professionals and students of Indian origin assemble in a town hall to hear India’s most promising politician hold forth on new opportunities emerging back home. 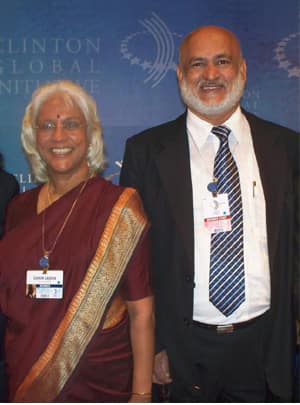 The duo: Shirin and Deepak are working on a solar-powered crematoria.

Rajiv Gandhi, the “heir apparent" to the then ruling Congress party, had just joined politics. He would go on to become India’s prime minister later that year after his mother, Indira Gandhi, was assassinated.

Deepak and Shirin Gadhia, who were in Amsterdam that day, were so inspired by Gandhi’s promises they became converts to the idea of returning to India. A few years later, and after subsequent meetings with Gandhi, the Gadhia’s, then settled in Germany, decided to move base to Valsad, Gujarat.

With his experience, Deepak planned to start energy conservation projects in India, while Shirin decided to set up a not-for-profit organization focused on the environment.

Their honeymoon in India was short-lived. Deepak, in an email interaction with Mint that went back and forth as he was travelling in “cold but sunny" Italy, says, “We imagined our return and integration in India would be seamless. Since we knew Rajiv Gandhi by now we thought we would get straight to work, but unfortunately that was not the case." He begins every email with “sunny greetings".

A bureaucratic tangle led to a huge loss for Deepak. Armed with a letter from the Indian Investment Centre (IIC), a special cell reporting to the Prime Minister’s Office (PMO) that was set up to help non-resident Indians do business in the country, he had imported a heat recovery system for Amul Dairy. “It took us nearly one year to get import licence, and when the machine came, instead of 40% import duty, which we (Amul and us) were initially promised, we had to cough up and pay 147% import duty. That killed the whole economics of the project."

He felt trapped in India. “I would have gone back to Germany but my wife. Shirin had by then started an NGO (non-governmental organization). She point-blank refused to leave India."

Shirin, 56 now, and three years older than Deepak, had begun running the Eco Center ICNEER (International Center for Networking, Ecology, Education and Re-integration) in Valsad and Vadodara. She was trying to convince women from villages near Valsad to stop using firewood for cooking, but there weren’t any easy alternatives. For a poor villager to use the more expensive gas for cooking was easier said than done.

That’s when Shirin approached her husband for help. Deepak’s friends in Germany were working on solar energy equipment and were willing to share the technology free. The technology for parabolic solar cookers came from his former colleague at Wacker Chemie, Dieter Seifert, who had invented the SK 14 solar cooker.

With loans from friends and family as well as some of their own money, they floated Gadhia Solar Energy Systems Pvt. Ltd. Deepak focused on manufacturing the solar cookers, and Shirin created awareness for the product among the villagers.

Their solar cookers cost Rs6,500 each, but were effective and cheaper than other clean alternatives over the long term. The cookers caught on and states such as Andhra Pradesh encouraged the Gadhias to develop a concept of “smokeless" villages.

Over the years, Deepak has become more ambitious.

He has installed solar-powered community kitchens for the Indian Army in places such as Leh. Even temple trusts have converted to solar-powered kitchens. His solar steam cooking system feeds the thousands of devotees at the Tirumala Tirupati Devasthanam.

This month, Deepak’s company installed the world’s largest solar steam cooking system in the Shirdi Sai Baba Temple in Maharashtra, with capacity to cook meals for 40,000 people a day. The system is being tested and will be operational in a few weeks.

Satisfaction for the Gadhias accrues not from supplying solar-powered systems to temples and defence establishments, but from projects that involve converting entire villages in Andhra Pradesh to cleaner cooking fuel. “If you ask me today on what gives me utmost satisfaction, I would say an addition of one more smokeless village in India."

Deepak says solar-powered systems should be made affordable so even poor villagers can buy them, and finds efforts by micro-finance companies to fund solar cookers heartening.

He is now working on a solar-powered crematoria. The system is “nearly ready" and “hopefully" would go into operation in a few months. It is being tested at the Muni Seva Ashram in Goraj near Vadodara, Gujarat.

Recognition for his work has started pouring in. The husband-wife duo recently received the solar entrepreneurship Bluesky Top Ten Technology award in China.

Gadhia Solar got funding a couple of years ago, when the Gadhias sold 50% stake in the firm to Zero Energy of UK, which is registered in Cypress, for Rs2.15 crore. And as more institutions and villages took to solar energy, Gadhia Solar’s revenue rose to Rs7 crore in 2008-09 from Rs2 crore the previous year.