Where does the rate cut take your money?

Borrowers should choose floating rate loans, and savers should lock in at the current deposit rates

Going into the first monetary policy review of financial year (FY) 2016-17, it was widely expected that the repo rate would be cut by at least 25 basis points (bps). One basis point is one-hundredth of a percentage point.

RBI also reduced the band between repo rate and reverse repo rate to 50 bps from 100 bps; reverse repo now stands at 6%. The policy not only addressed this but also other issues related to systemic liquidity deficit to ensure that the transmission of the current and previous rate cuts takes place. While this is good news for those who are looking for new loans, the reaction of both equity and debt markets was of disappointment.

Two things are clear. First, it’s likely that there were indeed higher expectations from the policy and second, the markets are driven by more than just one factor. But what impact will the 25-bps cut have on your equity, bonds, deposits and loans?

While most economists and market analysts were talking about a 25-bps rate cut, some were expecting it to be of 50 bps.

It won’t be unfair to say that the equity market was pricing in some optimism in the post-Budget scenario. After the government announced its commitment to maintain fiscal deficit, the ball was surely in the Reserve Bank of India’s (RBI’s) court to loosen strings on the monetary policy front. 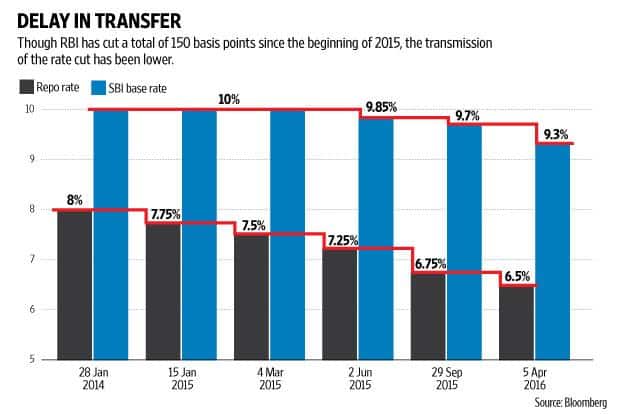 That, however, didn’t come through. The 25-bps cut was expected and priced in. An additional cut is what both the bond and equity markets were hoping for. Markets were aggressively positioned before the rate cut, said Ritesh Jain, chief investment officer, Tata Asset Management Company Pvt. Ltd. “But if you see what’s happening externally, most risk markets, emerging markets and even crude have already started correcting. In such an environment, unless there is a positive surprise for our markets, it is unlikely that the upside will be held on to," said Jain. Therefore, the correction in bonds, equities and even the currency market does not surprise him. “After the event is over, focus has gone back to earnings growth," he added.

The benchmark 10-year government security (g-sec) yield had rallied throughout March and the 25-bps cut was more than priced in. So, there was no surprise here. On the other hand, addressing the liquidity issue is a positive development that can impact the shorter-end of the yield curve or near-term yields positively.

Lakshmi Iyer, head-fixed income, Kotak Asset management Co. Ltd, said, “The policy is much more than just the 25 bps repo rate cut. The RBI has tried to remove all the liquidity hurdles that banks might face, in the hope that this will enable them to lend more freely."

By reducing the Marginal Standing Facility (MSF) rate and the daily cash reserve ratio (CRR) maintenance requirement to 90%, the objective seems to be that banks be able to access funds from RBI at a lower rate and thus address short-term lending at lower rates. Also, more funds get freed up, which could increase credit off-take. Given that the deposit growth in banks has slowed, these measures might help them.

For bond markets, there was also an expectation of increased open market operations (OMOs) from RBI, but some fear that monetary policy measures would alter the quantum of OMOs. Nevertheless, the focus has now shifted away from the cuts themselves.

“The big shift is the permanent liquidity injection through current measures, which will also support the intended OMOs. The policy stand indicates RBI is more accommodative and not so concerned about inflation as it was before," said Sujoy Das, head-fixed income, Religare Asset Management Co. Ltd. The market correction could be due to profit booking because of the recent rally in yields on the longer end, he added.

For domestic capital markets, it’s back to basics. For the equity market, the focus once again shifts to corporate earnings. “For earnings to return, spending has to come back. A loose policy, either on the fiscal side or monetary side, could facilitate this despite bringing back inflation. But on both fronts, action is restrained and a revival in corporate earnings would be challenging for the next two quarters," said Jain.

It is unlikely that banks will cut interest rates on deposits immediately mainly because of the fall in deposit growth compared with credit growth. “As of now, deposit growth is below lending growth, according to March 2016 data. So, there is no room for a cut in term deposit rates despite a 25-bps cut in repo rate," said Hatim Broachwala, banking analyst at Nirmal Bang Institutional Equities. When can deposit rate reduction be expected? “Only when deposit growth picks up will you see a cut in rate. Banks will likely take three to six months," said Broachwala. However, some banks are hinting at a deposit rate cut sooner.

“In a falling inflation rate scenario and falling interest rate cycle, it makes sense for savers to deposit and lock in at current rates. Though rates may not fall immediately, there is clear indication that it will happen in future. Hence, put your savings in order immediately," said Surya Bhatia, a Delhi-based financial planner.

RBI also noted that marginal cost of funds based lending rate (MCLR), the new benchmark lending rate, should ensure that current and past policy rate cuts transmit to lending rates. “The reduction in small savings rates announced in March 2016, the substantial refinements in the liquidity management framework announced in this policy review and the introduction of MCLR should improve transmission and magnify the effects of the current policy rate cut," the monetary policy note stated.

In 2015, the RBI had cut rates by a total of 125 bps, while banks had pared base rates by only 60-75 bps, reflecting a lack of full transmission. With a further reduction of 25 bps in the repo rate, there is still scope for another 60-75 bps transmission. But this may not happen immediately. “In future, transmission will happen in the lending space. The government has taken measures and reduced interest rates on small savings schemes. With this, banks have the scope to cut term deposit rates further. But since deposit growth has been lower, it will take some time to transmit. This will also play out on loan rates," said Vaibhav Agrawal, vice-president, research, Angel Broking Pvt. Ltd.

The government had in March announced a cut in interest rates on various small savings schemes in the range of 40-75 bps. “However, you can see faster transmission of rates in the coming months once MCLR-linked loans play out," he added.

As a borrower, what should you do? “Banks will look at passing the rate cut in the coming months. Go for a floating rate loan. Don’t opt for fixed rate loans," said Bhatia.

If you are looking to take a loan, new MCLR rates will take time to settle. Currently, MCLR-based interest rates on home loans are 10-15 bps cheaper than base rate loans. It will take more time for the new interest rate regime to play out. In either case, borrowers should choose floating rate loans. Savers should lock in at the current deposit rates as interest rates on fixed deposits are likely to fall further in the coming months.