Firms flagged political uncertainty as a key near-term risk, including that brought by the election of Trump in the USan outcome some cited as a key risk three months prior

Confidence in Asia toward business conditions over the coming six months dropped in the final quarter of 2016 to its lowest level in a year as firms fretted about sluggish demand in a persistently low-growth economic environment, a Thomson Reuters/INSEAD survey found.

This is a sharp reversal from the five-quarter high the Thomson Reuters/INSEAD Asian Business Sentiment Index had reached in the September quarter.

Firms flagged political uncertainty as a key near-term risk, including that brought by the election of Donald Trump to the US presidency—an outcome some cited as a key risk in the same survey three months prior.

The Thomson Reuters/INSEAD Asian Business Sentiment Index, representing the half-year outlook of 118 firms, fell to 63 from 68 in the September quarter, although it remained above the 50 mark separating optimism from pessimism.

How long before oil market re-balances?

In its latest Oil Market Report, the International Energy Agency (IEA) said the market is likely to move into deficit in the first half of 2017 by an estimated 0.6 million barrels per day (mb/d).

That is if the Organization of Petroleum Exporting Countries (Opec) promptly and fully sticks to its production target, assessed at 32.7 (mb/d), and non-Opec producers deliver the agreed cuts of 558,000 barrels a day outlined on 10 December.

IEA pointed out this is not a forecast by IEA, but is an assumption based on the numbers in Opec’s 30 November agreement, subsequently reinforced by the non-Opec producers.

“Before the agreement among producers, our demand and supply numbers suggested that the market would re-balance by the end of 2017," said IEA.

Real estate prices seem to be steady on an all-India basis.

The All-India Housing Price Index from Moody’s Investors Service, which is a weighted average of city indices with weights based on population proportion, was steady in FY16, as the chart shows. 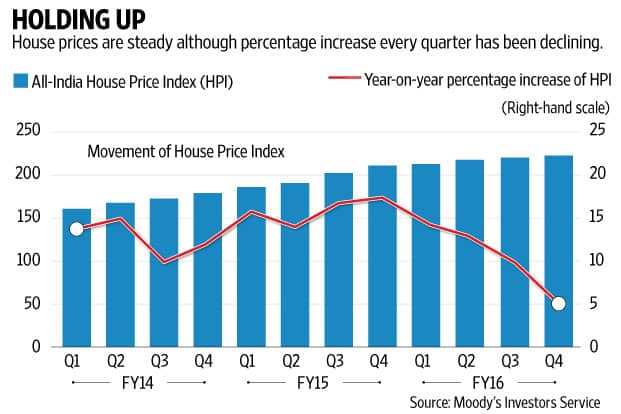 However, the rate of increase on a year-on-year basis has been falling.

The provisional estimate for the first quarter of FY17 indicates stable home prices at the all-India level. Meanwhile, with most of the home loans based on a floating rate of interest, lower interest rates are likely to improve pre-payment rates and also ease the debt burden of borrowers.

However, after the government’s demonetization move, real estate prices are expected to be on the decline.