New Delhi: The Reserve Bank of India (RBI) is in a fix about what to do with its money. Or, to be precise, what was once money.

In the basement of the RBI building here—and in 18 other locations across the nation—three machines work every day to shred soiled, returned currency notes that make their way back to the central bank. 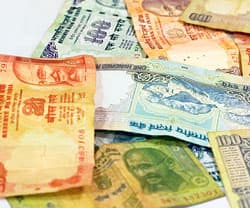 In dust: It is uneconomical to recycle notes in small quantities. Photograph: Rajeev Dabral / Mint

Those machines churn out a lot of shredded paper. In 2006-07, according to RBI’s annual report for the year, 7.325 million pieces of soiled bank notes—almost a fifth of all the notes in circulation—were destroyed. “But that quantity isn’t sufficient to feed even a medium-size concern," Gandhi says. That is also why paper mills, which largely depend on recyclables for their manufacturing, have not been interested.

Until the mid-1990s, RBI would incinerate its returned currency before looking for other, more eco friendly alternatives.

The most popular international model—shredding —was adopted, and thus began RBI’s campaign to evolve uses for its grated rupees.

“We tried recycling it by making products out of it, like cardboard or novelty paperweights," Gandhi says. “We tried making bricks out of them. We tried getting NGOs (non-governmental organizations) and commercial firms to see if they could use it. We even tried giving it away to the NGOs, free of cost." At present, RBI sends the paper out to be interred in landfills and reclamations.

The shredding room in the RBI is a high-security area, so Gandhi flicks to a closed-circuit camera view on a plasma television in his room. A team of three people man each of the three machines, which have been purchased for between Rs2-3.5 crore a piece. All the workers wear surgical masks over their noses and mouths, to filter out dust and fungus.

The machines first sort soiled notes from unsoiled ones. Then a photographic scanner checks for suspect notes. “These could be forgeries, but they could also be cut, mutilated, or scarred in a way that makes them unrecognizable to the scanner," Gandhi points out, so these notes, set aside, are later manually checked.

Each one of the 19 shredding facilities is protected by the same rings of security that are in place at the RBI mints. “We have physical checks, biometric checks, and entry passes under double custody," Gandhi says. “We conduct periodic checks, full audits and surprise checks."

Gandhi flicks to a different screen view, of a long, deserted, underground corridor, with a pile of white gunnysacks sitting forlornly outside a door. “We produce between 20 and 25 sacks like that every day," Gandhi says. “Then, once a week or so, when there are enough bags for a truckload, somebody comes and picks them up."

RBI isn’t the only central bank to face this problem of disposal, according to Gandhi. “Most countries struggle to reuse their shredded banknotes," he says. “So far, no enterprising person or organization has been able to tap this potential at all."