Indian sugar is in high spirits

The provocation for the increase was the impact of excessive rain in Brazil on the sugarcane harvest. A shortage of sugar in Brazil and estimated stable production in India would have contributed to a tight global sugar market, and hence the bullishness in prices.

Then India’s own monsoon did a vanishing act at the start of the season, giving further impetus to the bullishness. Other factors helped, too, as the government—both at the centre and at Uttar Pradesh which is a key sugar producer—is seen as being friendlier towards sugar mills, and less incensed about rising sugar prices.

Since mid-July, however, the correlation between domestic and international sugar prices has snapped. International prices have fallen because Brazil’s sugar production recovered subsequently, as the skies cleared. As of end-May, from the season’s start, Brazil’s 2012-13 sugarcane harvest in its south-central region was down by 29.6% year-on-year, and sugar production was down by 26.2%, based on data from industry association Unica. Its latest report, as of mid-August, shows an improved picture, with sugarcane processing from the start of the season down by 12.6%, while that of sugar is down by 12.3%. 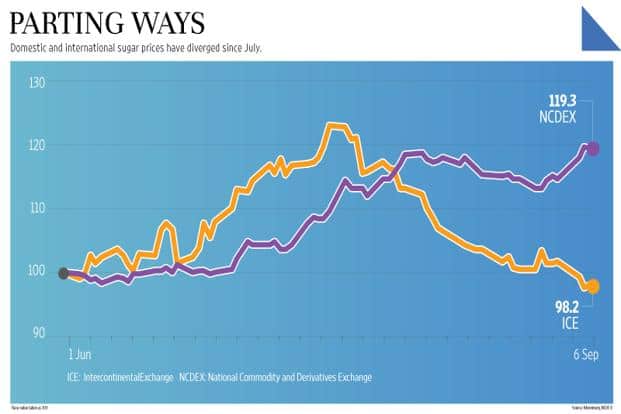 In India too, the monsoon situation has improved though not soon enough to prevent a fall in Maharashtra’s crop output. Still, total sugarcane area under cultivation has risen by 4.4% over last year, based on the government’s crop situation report as of August 24. After a bumper crop in 2011-12, estimated at 26 million tonnes, and the current season expected to yield in the 24-25 million tonne range, fears of an international sugar scarcity have receded.

What could explain this aberration? The earlier correlation may have been just a coincidence. Domestic sugar producers may have actually regained pricing power. The government does not plan to ban exports, despite a lower expected sugar output in the forthcoming sugar season. Why should it when, as a Reuters story says, exporters are apparently seeking to cancel export contracts. Selling in the domestic market has become more attractive.

Festival demand, too, may be playing a role, as the next three months will see demand surge. Whatever may be the reason, Indian sugar mills have nothing to complain. While investors may be tempted to get bullish by these turn of events, they should keep their eyes open for harvest updates and on the procurement price announced by states. These should be the next key triggers, both for sugar prices and stock valuations.