The problem is that in recent years, the rate of growth in deposits has shown little correlation with real rates

In times of high inflation, when interest rates are on the rise, central bankers have often resorted to arguing the case from the depositors’ side. High inflation eats into savings and hits depositors. High inflation also means that the real interest earned on deposits is negative, which reduces the incentive to park savings in financial instruments and pushes depositors towards physical saving instruments like gold or real estate.

Most recently, Reserve Bank of India governor Raghuram Rajan, made this point in his own inimitable way. In a speech in January, Rajan highlighted complaints from depositors that he had been getting. “I used to get 10% earlier on a 1-year fixed deposit, now I barely get 8%", “please tell banks to pay me more else I won’t be able to make ends meet" were the typical sentiment expressed by these depositors, said Rajan. The governor went on to explain through the use of his now famous dosa-economics, that depositors are actually better off than before. Inflation is lower and so the real purchasing power of savings (principal plus interest) has improved even if the upfront (or nominal, in technical terms) interest rate offered by banks has come down.

There is no arguing with that logic. The problem is that in recent years, the rate of growth in deposits has shown little correlation with real rates (see chart plotting real deposit rate versus rate of growth in deposits). According to a 12 April report by Soumya Kanti Ghosh, chief economist at the State Bank of India (SBI) Ltd, the correlation between the two actually is weak. 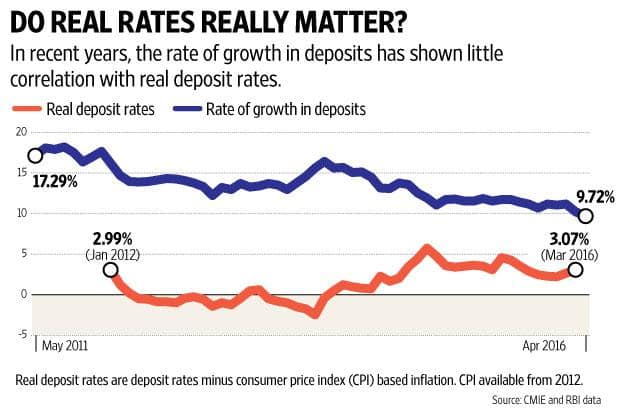 The years 2012 and 2013 were marked by high inflation. Consumer price inflation had picked up from about 6% in January 2012 and soared to above 10% by summer. Inflation remained high all the way until December 2013. At times, the rate offered by SBI on one-year deposits was around 9.25%, which means that for most of this period, the real interest earned on deposits was negative. Deposit growth remained strong and averaged between 12% and 16%.

Why? Well, for one, deposit growth would be linked to nominal gross domestic product (GDP) growth, which was high during that period. It is also possible that externalities such as uncertainties surrounding the economy pushed investors towards the safety of bank deposits. Switch now to the current time period. Inflation has been on a steady decline and while bank deposit rates have come down, inflation has fallen faster. The real rate, which turned positive in January 2014, has stayed positive and risen since then, and at present works out to be around 3%. Yet the needle on deposit growth has not moved.

Growth in deposits has been close to 10%, after slipping briefly to its lowest since 1963. Again, there may be one-off reasons. For instance, as highlighted in this column a few weeks back, recent months have been marked by unusually high growth in currency with the public. This would naturally take away from the bank deposit pool. Even so, the experience once again suggests that real rates are not the driving factor behind deposit growth.

Ghosh highlighted this in his report. “…contrary to popular perception, high real interest rate is actually leading to lower deposit growth rate. This is paradoxical, but the divergence between the two has been widespread and in opposite direction since Sep’14. Despite a relatively high real interest rate, deposit rates of banks have not picked up," he wrote. “We believe that given high real deposit rates are more the by-product of lower inflation, such negative causation may be resulting in people to spend more/leakage through currency," Ghosh added.

There are other reasons to believe that depositors do not make decisions based purely on interest rates, real or even nominal. The experiment with freeing up the savings interest rate has not had much of an impact. Smaller banks that are offering rates of about 6% (compared to the 4% offered by most banks) have seen a growth in their deposit base, but they have not managed to shake up the market in a way that would force any of the large banks to adjust their savings deposit rates.

If rates don’t drive depositors, then what does? Maybe nothing.

Note that there have been no significant swings in deposit market share of different bank groups over the years. According to CMIE data, the share of private banks in the deposit base has remained 17-20% over the 2003-2015 period (the period for which data was available). SBI (and its associates) and nationalised banks continue to hold above 70% of the deposit market despite the increased competition during this period.

Does this prove that depositors are creatures of habit more than anything else like rates or differentiated services? If so, where does that leave the 20 new deposit taking entities (small finance banks and payments banks) that are preparing to come into the market?

It has been feared that these differentiated banks could muddy the deposit market by offering higher deposit rates and taking share away from banks. But if deposits are not particularly sensitive to rates, will they really be able to do this? A question worth pondering over.