This economic recovery is different. During the last recovery in 2003, the benchmark Sensex index on the Bombay Stock Exchange had moved up 65% in November 2003 from the low it made in April that year. 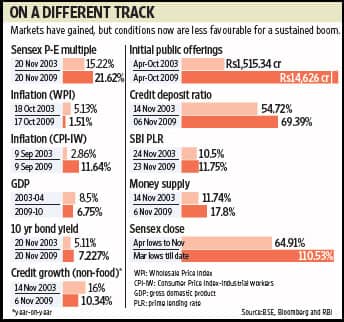 This year, the Sensex is up 110% from the lows it made in March. So the pace of the recovery in the market has been far sharper.

It could be argued, of course, that the fall too had been greater, but there are a number of other indicators which suggest that although the market continues to power ahead, it faces strong headwinds. The chart shows the differences between the 2003 recovery and the current one.

Starting with growth in gross domestic product (GDP), in 2003-04, GDP growth was a high 8.5%, much higher than the 6.75% growth estimated this fiscal by the Prime Minister’s economic advisory council. Yet this lower GDP growth has been accompanied by a stronger market. That has stretched valuations, seen from the fact that while the past price-earnings multiple for the Sensex was 15.2 in November 2003, it’s as high as 21.6 now.

That’s not all. In November 2003, the yield on the 10-year government bond was around 5.1%, while it’s much higher at around 7.2% now. Similarly, prime lending rates of banks are higher than what they were in November 2003. That’s the result of higher credit-deposit ratios with the banking system. In November 2003, the credit-deposit ratio was a low 54.72%, but this ratio is much higher at 69.39% at present. Despite all the current talk of liquidity, interest rates are higher now than they were in 2003.

Non-food credit growth, at 10.3% year-on-year (y-o-y), is much lower than its growth rate of 16% y-o-y in November 2003. But one reason for that is seen in the much higher amounts mopped up by initial public offerings (IPOs) this year. Between April and October, IPOs totalled Rs14,626 crore, compared with a mere Rs1,515 crore in the same period in 2003. That’s besides the substantial amounts raised through qualified insitutional placements, which didn’t exist in 2003.

Clearly, companies are tapping non-banking sources for funding. The other problem lies in inflation. While it’s true that Wholesale Price Index inflation is much lower at present than what it was in 2003, inflation according to the Consumer Price Index is much higher. Also, money supply growth is much higher than what it was earlier. This puts pressure on the Reserve Bank of India to tighten monetary policy.

In short, while the markets have run up considerably, conditions now are less favourable for a sustained boom than what they were at the same stage of the recovery in 2003.