The financial performance of Inox Leisure Ltd for the three months ended 31 March was adversely affected because there weren’t many successful box-office hit movies during the quarter. It is clearly reflected in the 13% year-on-year decline in footfalls of comparable properties last quarter. The occupancy rate, too, has declined and the average ticket price has increased by merely 1% to ₹ 153.

Inox’s consolidated revenue for the March quarter increased 16% from a year earlier to ₹ 218 crore. However, this year’s March quarter includes the impact of the Satyam Cineplexes Ltd acquisition. Satyam Cineplexes became a Inox subsidiary on 8 August. A sequential comparison for Inox does not make sense because the festival season tends to make the December quarter stronger than the March quarter, which has examinations playing spoilsport on the operating environment.

What augurs well is that revenue from food and beverages and advertising compensated for the weak content to an extent. However, it wasn’t enough to make a case for a better profit margin. According to Inox’s quarterly investor update, its operating margin for the March quarter fell 382 basis points to 4.8%. A basis point is one-hundredth of a percentage point. 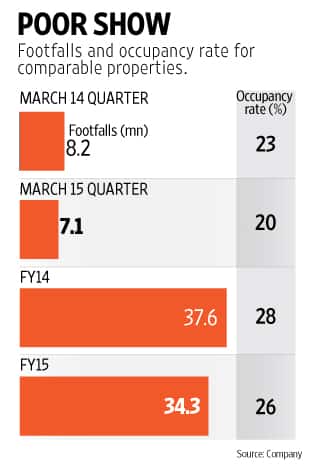 A sharper rate of increase in employee costs, other expenses and property rent took a toll on the operating performance in the March quarter. Further, higher depreciation costs, finance expenses and a decline in other income meant Inox reported a loss of ₹ 4 crore last quarter.

With Inox accounting for a 23% share of multiplex screens in India, it is reasonably well-placed to make the most of the situation when discretionary spending increases. An increase in average ticket prices will help, too. However, how movie content fares is of utmost importance to multiplex companies in general and Inox is no exception. To a great extent, it would determine whether Inox’s shares will reverse their underperforming trend so far this financial year.