A good part of the rise in the Indian stock market can be explained by the fact that these days, equities the world over move in lockstep

Has the tsunami of liquidity from central banks in the developed countries lifted market valuations? Well, MSCI India is now trading at 18 times expected earnings for next year, about the same level where it was at the beginning of 2006, before the financial crisis.

What’s different this time around is that earnings prospects have considerably diminished. Nobody is talking of 30% growth rates in company profits and the private investment cycle is yet to kick off as data for new project announcements from the Centre for Monitoring Indian Economy Ltd’s database shows. 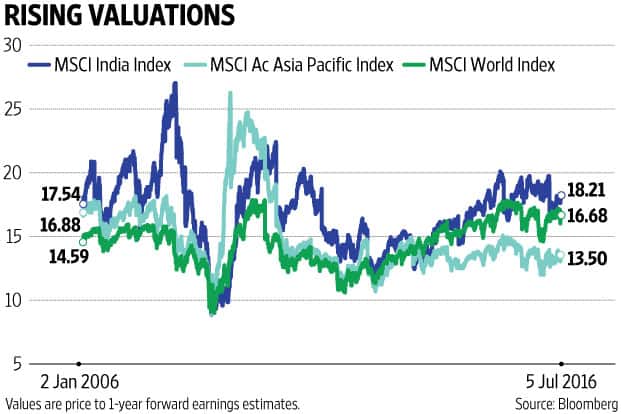 A good part of the rise in the Indian market can be explained by the fact that these days, equities the world over move in lockstep. As chart 1 shows, the price-earnings multiples of MSCI World, essentially developed markets, and that of MSCI Asia Pacific have also risen.

The valuations of MSCI World have been boosted by quantitative easing (QE) and low interest rates the world over. As the chart shows, the first spike in price-earnings of this index came on the heels of the first round of QE announced by the US Federal Reserve in late 2008. This flow of easy liquidity, which continued till late 2013, meant that despite wobbles such as Grexit, Dubai and banking crises in eurozone nations such as Spain and Ireland, valuations never breached the lows of late 2008, when Lehman pricked the bubble.

Indeed, now with Brexit perversely raising the hopes of continued and further liquidity injections, developed market valuations are higher than where they were a decade ago. The promise of liquidity has been conveniently used to banish the thought that it will also hurt global economic growth.

The story of emerging markets in general has a different set of factors affecting it. Although the ebbs and flows of valuation multiples match those of world markets, they have had a more difficult time. Valuations of MSCI Asia Pacific ex-Japan are below that of developed countries. One part of that is owing to the slowdown in China, the largest commodity consumer, which in turn hurt other emerging markets who are commodity producers. The slack in world exports growth has also diminished the excitement around the emerging market story.

How has India’s premium changed compared to global markets? Chart 2 has the details. The premium against developed markets has fallen compared to a decade ago as the latter have gained more from the liquidity torrent. However, the premium has risen compared to emerging markets. Given the strong promise of domestic consumption growth in India, many investors continue to have faith in the country compared to other export-oriented markets.