The year 2015 was a prelude to transformation in the lending, payments and personal finance space mostly due to the pace at which financial technology (fintech) companies have emerged in India. As of today, there are over 750 fintech companies in India. Of these, 174 were launched in 2015 itself, according to Traxcn, a data analytics company. In 2015, investment in fintech touched $1.2 billion, finds Traxcn, a large part of which was the $890 million raised by Paytm. In the previous year, investment stood at $145.1 million. In the past three years, global investors have plowed more than $10 billion into India’s consumer internet companies, fueling a boom in startups that create apps, according to Bloomberg. The global story was no different.

According to Neha Punater, partner, management consulting, KPMG India, global investment in fintech ventures tripled to $12.21 billion in 2015 from $4.05 billion in 2014 with over 12,000 start-ups emerging globally. “P2P (peer-to-peer) funding, online lending, sourcing and m-wallets were the main areas, attracting more than 50% of the investments in fintech globally in 2015. Emergence of new technologies such as cloud-based systems and biometric recognition is facilitating the development of new payment products," said Punater.

To a large extent, 2015 was also a year during which fintech companies not only developed new products but also worked towards building an ecosystem to broaden the acceptance of new payments options. These can broadly be divided into three segments—payments, lending (business and consumer) and personal finance. For some companies, the segments can overlap.

Here is a look at how these categories evolved.

In 2015, companies in the payments and transaction space worked towards building an ecosystem that would boost acceptance of non-cash transactions such as wallets and transactions through SMS. The payments category can be further divided into wallets, payments gateways and payments solutions. Most of the companies in these segments overlap in terms of providing services. In the past 12-18 months, wallets have become popular, at least in the bigger cities, mostly due to taxi haling services.

The product category widened in India as restricted usage of e-wallets and in-app wallets was slowly done away with. From being one-merchant-use products, wallets started getting accepted at multiple platforms such as e-commerce sites, small merchant outlets and even larger retail outlets. “For us, 2015 was the formative year. People finally started using their mobile phones to do business payments and transactions," said Vijay Shekhar Sharma, founder and chief executive officer of Paytm. Sharma is also one of the 11 applicants that got payments bank licences from the Reserve Bank of India (RBI) in August this year.

Though the awareness of wallets has increased, the number of active users is yet to take off. “In the beginning of the year, we had 40,000 merchants. Now we have expanded to 120,000 merchants. Though the number of wallets has increased, less than 10 million people store money in them if you put together all the wallet service providers. The number of active users has not gone up," said Nitin Gupta, co-founder and chief executive officer, PayU India, an online payment processing company.

Wallet and payments service providers went a step ahead and built products to enable one-touch solutions instead of a user having to go through multiple steps to complete a transaction. “We have recently launched one-tap payment, which I think will kill the wallets," he added.

Some companies entered newer areas too. “For us, the focus was on personal finance. Hence, we launched Cube app. In terms of payments gateway, we provided segmented solutions for each merchant type," said Satyen Kothari, co-founder, Citrus Payment Solutions Pvt. Ltd.

The number of lending focused companies apart from banks increased aggressively this year compared with the last couple of years. Lending in fintech can be broadly categorised into four types—P2P lending, crowdfunding, digital credit to merchants and individuals and loan marketplace.

In 2015, P2P lending emerged as an aggressive breed. This year, close to 20 new online P2P lending companies were launched. As of now, P2P lending is not regulated in India. Earlier this month R. Gandhi, deputy governor, RBI said the central bank is actively studying this space and will soon come out with a discussion paper on the issue.“The penetration will increase in countries such as India, China and Japan because 60% of the households are unbanked. Small credit will be the key drivers in India," said Ranjit Tinaikar, managing director—advisory and investment management, Thomson Reuters.

Crowd funding companies also saw an increase in the number of projects they funded this year. For instance, Ketto, a crowdfunding platform, raised money for 2,000 projects versus 200 last year. “Volumes went up for us. Last year, the crowd funding volume was around 1 crore. This year so far (mid-December), it has touched 9 crore for our platform. This is mostly due to increase in awareness and also comfort with transacting online," said Varun Sheth, founder and chief executive officer, Ketto.

Wallets and payments companies such as Citrus Payments Solutions and Pine Labs Pvt. Ltd have either ventured or are planning to enter into digital credit lending to merchants and individuals. “We have integrated with three non-banking finance companies (NBFCs) to provide credit to retailers who have cash flow crunch," said Kush Mehra, president Asia-Pacific, payment business, Pine Labs India. The focus of these companies is to provide credit digitally to merchants as well as individuals. These can either be big ticket business loans or micro-credits. Another example of a mobile payment company venturing into credit space is Paytm, which has already partnered with eight financial institutions.

Loan marketplace have been in business in India for longer than P2P lenders, crowd funding platform and digital credit. These companies, such as Bankbazaar.com and Deal4loans.com, provide a space where you get a consolidated list of loan products and their charges. The information may not be exhaustive but it is a fair indication of the range of products and charges. “This year the focus has been on growing the product basket. Our number of active visitors increased from 1 million a month in January 2014 to 5 million a month in December 2015," said Adhil Shetty, founder, Bankbazaar.com.

Deal4loans, on the other hand, is looking to provide small credit on the go to its existing customers.

Fintech companies that come under the broad category of personal finance can be further divided into three segments—insurance, investment and money management.

“The awareness of using platforms like ours has increased," said Yashish Dahiya, chief executive officer, Policybazaar.com, an insurance aggregator. “This year we did transactions worth about 560 crore, which is double of last year," he added. The company also runs a loan portal, paisabazaar.com, and is looking to increase its focus on providing credit scores, for which it recently tied up with credit bureau Equifax Credit Information Services Pvt. Ltd. Coverfox, another online insurance portal, focuses on general insurance and the holds a broking licence. “Our focus is to provide protection-only products. We want to do this without any manual intervention and seamlessly, besides helping customers with claims," said Varun Dua, chief executive officer and co-founder, Coverfox. This year the company raised $16 million. In 2016, it plans to launch apps, focus on technology advancement and product innovations. 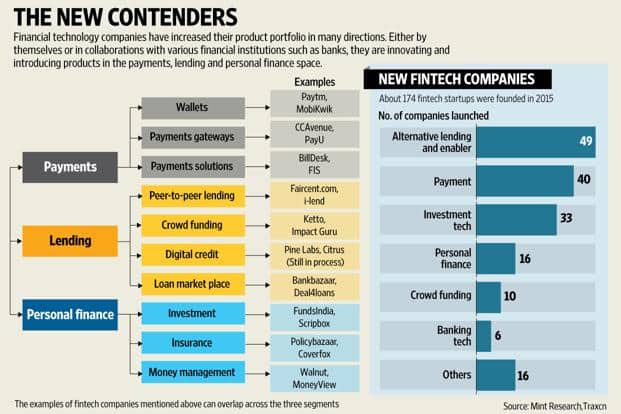 Those companies dealing with investments, such as FundsIndia.com and Scripbox, innovation around digitisation of KYC documents and process was the primary focus. “There was a move towards digitisation of KYC. We are working towards different ways to cut down the manual intervention as much as possible. Robo advisory was also a key focus area in 2015," said Srikanth Meenakshi, co-founder, FundsIndia.com. For instance, as a part of the KYC process earlier, customers had to submit a cancelled cheque to a FundsIndia executive. Now, customers can upload the image of the cheque.

Money management fintech companies currently give comprehensive details about your income, investments and expenses. These companies, Walnut and MoneyView, for instance, are looking to expand into transactions and payments space as well.

Then there are those that cut across these segments and offer all the three services—insurance, investment and money management—on one platform. Aditya Birla Money Ltd’s MyUniverse is one such name. In 2015, it added new products to its basket. “We launched the ZipSIP platform to help an investor invest in a customised SIP (systematic investment plan) portfolio based on risk profile in less than 2 minutes. We also launched seamless equity transactions for investors, which is in line with our vision to convert savers into investors. We also launched Maxit mobile app to help users access smart savings," said Rahul Parikh, head, MyUniverse.

Year 2015 also saw banks—big and small—partnering with fintech companies to provide technology and products to their consumers. Globally, fintech is considered a threat to the formal banking systems profitability. According to McKinsey & Co’s 2015 annual review of global banking, over the next decade, a digital revolution will likely wipe out approximately 60% of earnings from certain financial products, as fintech drives prices down and eats away lenders’ profit margins.

In some developed economies, there are already a few branchless banks such as Atom Bank. Will a similar development happen in India as well? “The way technology is developing, nothing is impossible. The virtual bank kind of a thing in advanced economies was attempted a few years back also. This is not the first time," said S.S. Mundra, deputy governor, Reserve Bank of India. “In the UK, they have started but it is yet to take off in the real sense. Right now, you will have a near equivalent to that, like the payments bank. To become a complete virtual bank, there has to be a supporting ecosystem. We have some fragmented system and we are moving somewhere in that direction but not to the full extent. It will eventually come but first, the ecosystem needs to be developed around it," he added.

Considering the rise in acceptance of fintech products followed by the increased thrust on building an infrastructure for it, a lot of action can be expected the next year as well.