Limited signs of a pickup in demand indicate downside risks to FY17 sales growth and, in turn, earnings, say analysts

Retail firms Shoppers Stop Ltd, Titan Co. Ltd and Bata India Ltd struggled in the June quarter as customers held on to their wallets. For instance, Shoppers Stop’s 5.5% like-to-like (LTL) sales growth for the firm’s department stores was hardly inspiring. LTL growth—a measure of the sales increase at stores that have been open for at least a year—would have been more disappointing if it weren’t for advancing the discount sale period by three days.

Jewellery revenue accounted for three-fourths of Titan’s June quarter income and rose just 3% year-on-year (y-o-y). The absence of activation (of promotions)—studded jewellery activation had begun in June last year as against July this year—is one reason for muted jewellery performance. Additionally, the wedding season was shorter this time. Titan’s watch business (its second major business) was disappointing, too, with revenue increasing just 1%. However, Titan’s pre-tax earnings before exceptional items rose by nearly one-third to Rs270.6 crore. That was helped by a better operating profit margin, lower finance costs and relatively slower rate of growth in depreciation costs.

Bata India’s revenue, too, declined 1.5% year-on-year due to weak demand in the footwear industry and a general market slowdown. Its operating profit declined 1.5%. 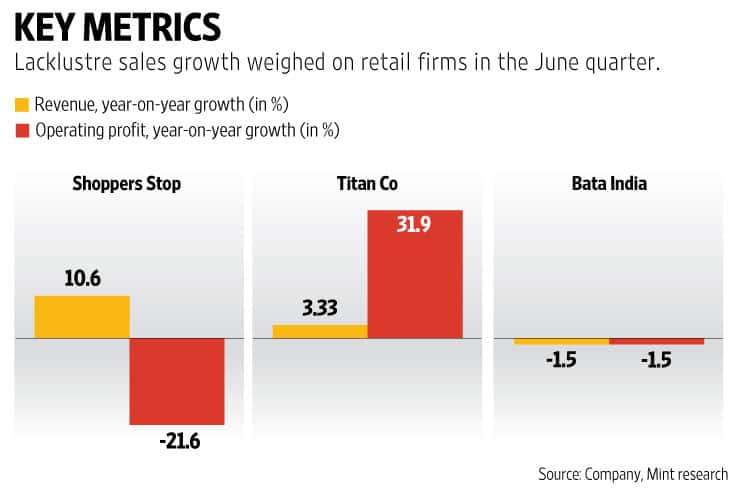 What is the outlook?

In Bata’s post-result note, Nirmal Bang Equities Pvt. Ltd. said, “We do not expect the sales momentum to revive sharply soon as the company’s strategy on e-commerce involves only a gradual scale-up; demand outlook is weak and competition is intense from online as well as offline players. Despite a subdued June quarter, Shoppers Stop has maintained 8-9% LTL sales growth guidance for fiscal 2017. That will be helped by the festival season sales and benefits from payouts to government employees.

Until a meaningful revival in demand is visible, investors may be cautious. Even as the Titan stock has performed well between 31 March and 23 September, the other two stocks have been laggards.