Mumbai: A whistleblower complaint of governance concerns led to a steep fall in the shares of Sun Pharmaceuticals Industries Ltd on Friday. Sun Pharma share prices plunged 12.12% to ₹375.4 during the day’s trading, lowest since February 2013, before closing at ₹390.75, after a media report of a complaint by the unnamed whistleblower to the Securities and Exchange Board of India (Sebi) raised concerns on the drugmaker’s corporate governance.

The largest drugmaker by market value in India recorded its biggest intraday percentage drop since 29 May 2017 because of the complaint, published on Wednesday by Moneylife magazine.

Mint could not independently verify the whistleblower allegations. 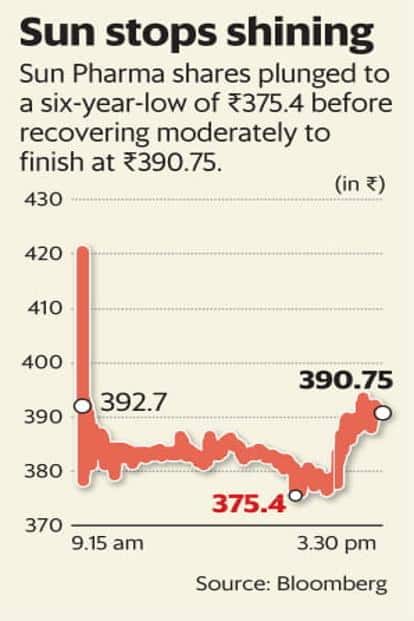 After the fall in share prices, Sun Pharma uploaded its communication with Sebi on the BSE website. The company, in the letter to Sebi, sought an examination of the issue in its entirety. It also said there is a great asymmetry in the information circulating between analysts, investors and media, leading to intense speculation. It raised concerns about the contents of the complaint being shared with selective investors.

Moneylife is allowing institutional investors to examine the complaints after proving their credentials.

“The availability of information contained in the whistleblower documents to a set of selective investors does put other investors including retail investors in a disadvantageous position. We are concerned that certain entities/individuals are adopting unfair trade practices prejudicial to the interest of shareholders and other stakeholders," said Sun Pharma.

What is driving FIIs' bullish bets on Nifty?

Why inequality dipped when poverty worsened

How the RBI's digital currency can help economy

“It is evident from the fact that shareholders’ value has been drastically eroded within a short span of time due to unsubstantiated complaint/allegation against the company and mala fide campaign launched by certain media houses," the company said.

“While there are concerns, our funds are diversified enough that the net asset value of the fund would balance out and the impact of the fall in prices would be stabilized," said a fund manager with substantial holdings in Sun Pharma, who declined to be named.

However, J.N. Gupta, the founder of Stakeholder Empowerment Services, said the company is not doing enough to address investor concerns.

“The issue is two-fold: one to go into the veracity of the allegations. We would need to wait for Sebi’s examination whether these are genuine concerns before making an assumption. The selective dissemination of information also could lead to or mean unfair trade practices," said Gupta.

Jayshree heads a team of reporters focussing on legal, regulatory, investigative stories. She has worked for over a decade, reporting on financial scams, legal stories and the intersection of corporate and regulatory issues. She is based in Mumbai and has previously worked with Business Standard, Mint, The Morning Context and Bloomberg TV India.
Read more from this author
Catch all the Corporate news and Updates on Live Mint. Download The Mint News App to get Daily Market Updates & Live Business News.
More Less
Topics
OPEN IN APP