Thanks for Visiting Mint
You seem to have an Ad Blocker on. Please turn it off in order to continue, or whitelist Mint
HOW TO TURN OFF AD BLOCKER
OR
REFRESH IF YOU ALREADY TURNED OFF THE AD BLOCKER
Home >Market >Mark-to-market >Rural auto sales derail on note ban, urban markets hold out

The impact was sharper in rural markets, where cash transactions are higher, compared to the urban

All eyes were on the December auto sales numbers to gauge the impact of demonetization. Brokerage firms had forecast severe sales contraction in the consumer segment and trimmed earnings estimates for fiscal years 2017 and 2018 as the cash crunch could hurt demand. The BSE Auto index went downhill from 8 November, following the note ban.

Yes, December sales did derail. But the impact was not as bad as forecast. One must also view it in the context that it’s not a great month for auto sales.

The impact was sharper in rural markets, where cash transactions are higher, compared to the urban. Also two-wheeler sales, which are largely cash-driven purchases compared to passenger and commercial vehicles, fell harder. For example, Hero MotoCorp Ltd’s December sales fell by 34%, the sharpest among two-wheelers given its higher exposure to rural areas.

According to Nitesh Sharma, an analyst at PhillipsCapital India Pvt. Ltd, “HMCL’s (Hero MotoCorp’s) sales are weaker than expected and even Hero FinCorp’s 100% loans for vehicle purchases has not helped improve sales."

However, Bajaj Auto Ltd and TVS Motor Co. Ltd, which have a balanced market presence in both rural and urban areas, registered a relatively lower drop of 18% and 8%, respectively, in two-wheeler sales (domestic and exports included). 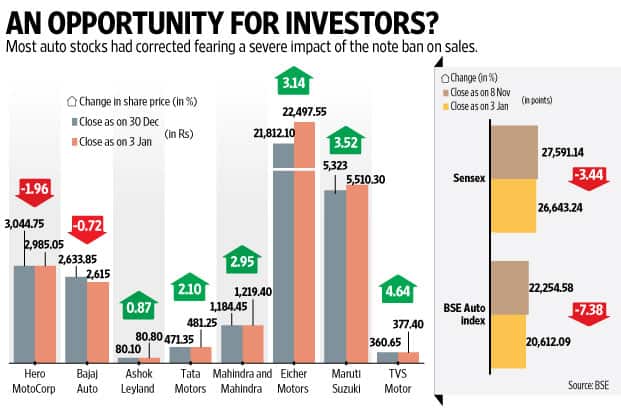 Proving the rural-urban contrast is the Royal Enfield sales. This niche premium motorcycle brand whose sales are focused on urban markets, was unscathed by the note ban. On the contrary, it clocked 42% growth in December, with no backtracking in footfalls at the dealer outlets.

That the note ban hit the rural and lower-end of the market was also evident in passenger car sales. Noticeably it was the entry-level segment that was hurt the most. Market leader Maruti Suzuki India Ltd’s domestic sales in December declined 4%, when compared to a year back. A similar decline in Hyundai Motor India Ltd’s car sales too proves the point, as the firm has a huge presence in the entry-level car segment.

Strangely, the two leading tractor companies, Mahindra and Mahindra Ltd and Escorts Ltd posted decent single-digit growth in December sales. This was a pleasant surprise given that brokerage firms forecast a drop in sales post the note ban. Whether this is a sign of recovery in the farm sector or simply the effect of the low base of earlier years, when sales contracted due to severe drought, is still unclear.

Another segment that beat expectation on the Street is medium and heavy commercial vehicles. Sales had been declining earlier too as freight rates were low due to weak demand and low utilization of the fleet. That truck rentals recovered in December after tolling resumed could improve confidence among fleet operators.

That said, we’ll know only at the end of the March quarter if the effect of demonetization is history or if it is likely to have a long-drawn impact. For now, the mood is cautious but not pessimistic, which explains why auto stocks rallied after the December sales numbers were announced. The two-wheeler segment may be the last to recover from the note ban tremors.

Most brokerage firms concur that any correction in stock prices of auto firms could be an opportunity for the equity investor.