According to latest data from the Bank for International Settlements (BIS), house prices were strong in the first quarter of calendar year 2017 (Q1 of 2017).

Data on India is interesting. Given reports about the lull in the housing market, the steady year-on-year increase in prices is a positive surprise. After contracting by 1.8% in Q1 of 2016, real prices of homes (adjusted for other price changes like inflation) have steadily moved up until it rose 6.6% year-on-year in Q1 of 2017. 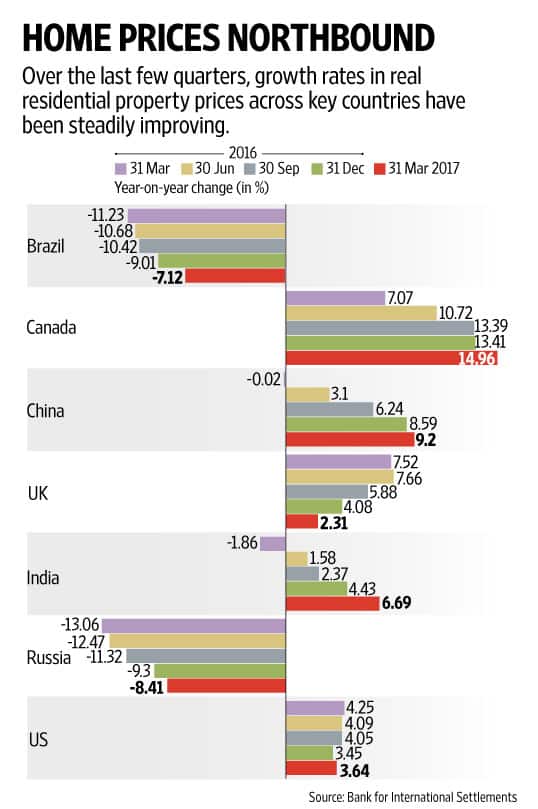 This can be explained by decreasing inventory in the pipeline and fewer new project launches. Perhaps, the low base helped. Besides, there has been higher activity in affordable housing due to lowering of home rates and several government schemes to push “Housing For All by 2022".

However, China’s 9.2% growth rate outpaced India’s and all other emerging markets’.

The BIS report shows that although prices recovered by an average 3.8% in emerging markets, the trend was mixed, with countries like Brazil, Indonesia and Russia seeing falling prices. “House price increases were particularly strong on average in emerging market economies in Q12017, though important disparities remained across major regions," it said.

House prices closely toe economic well-being, reflected in steadily improving house prices in developed economies like the US, Australia and Canada since the crash in 2008. While Canada shows the sharpest rise of 15% in Q1 of 2017 after clocking double-digit growth for many quarters, growth rates in the UK have come off since the referendum on Brexit.

So, for homebuyers in India, there is little respite on prices given that inventory levels have fallen further in the last few months. New regulations like the Real Estate (Regulation and Development) Act that ensure higher transparency in the sector, will contain supply and improve demand in the long run.