Kochi: India’s spice exporters have achieved at least two-thirds their target for FY09, as a rise in overseas sales of value-added products such as curry powders and masala offset declining exports in chilli, pepper and mint products.

Traders exported 334,150 tonnes of spices worth Rs3,810.95 crore between April and December, according to data from government trade promotion body Spice Board. The board had set an export target of 422,785 tonnes worth Rs4,350 crore for FY09. 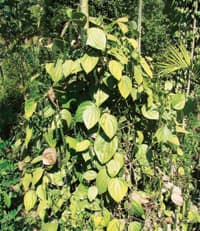 Not so hot: Pepper vines grown in Kerala. Low inventory and high international prices have pushed pepper exports down to 19,100 tonnes. Ajayan / Mint

Spice exports in the first nine months increased 3% year-on-year, and by 15% in rupee terms, the data shows.

Between April and December, export of seeds such as cumin and coriander rose because of crop failures in the biggest producer countries such as Syria, Turkey and Iran. These exports rose to 28,500 tonnes in April-December from 18,855 tonnes in the year-ago period, while coriander exports went up to 19,600 tonnes from 19,150 tonnes.

Overseas sales of value-added products such as curry powder, masala and spice oils continued to increase substantially, both in terms of quantity and value. Curry powder exports rose 25% to 10,500 tonnes, while that of spice oils increased 15% to 5,550 tonnes.

The traders have also achieved their targets for other spices such as fenugreek, nutmeg, vanilla, mustard, ajwain and poppy.

This was mostly because Bangladesh, which bought about 30,000 tonnes of Indian chilli in fiscal 2008, reduced purchases, though traditional buyers such as Malaysia, Indonesia and Sri Lanka continued buying.

However, chilli exports are likely to bounce back as a new crop is expected in a month, said V.J. Kurien, chairman of the Spice Board. A meeting of stakeholders in the chilli sector will be held by Thursday at Guntur in Andhra Pradesh, the country’s largest grower of the spice, to study the factors affecting exports, he added.

As for pepper, higher prices and low inventory in international markets with buyers finding it difficult to hold large stocks at current rates, have pushed exports down to 19,100 tonnes worth Rs317.77 crore in the first three quarters from 27,580 tonnes worth Rs400.2 crore a year earlier, according to the Spices Board. Average prices of pepper increased to Rs166.37 per kg from Rs145.11 per kg earlier.

Ginger exports fell 43% to 3,250 tonnes worth Rs24 crore in the April-December period. Overseas sales of whole garlic increased to 545 tonnes from 540 tonnes earlier, but fell more than 30% in value to Rs217.75 crore as global prices declined.