The premiums for motor insurance policies are set to go up by at least ₹ 650, owing to an increase in the sum insured for the compulsory personal accident cover you need to take when you buy a motor insurance. The Insurance Regulatory and Development Authority of India (Irdai), through a circular released on 20 September, has instructed general insurance providers to increase the sum insured under the compulsory personal accident cover to ₹ 15 lakh from the present cover of ₹ 1 lakh for two-wheelers and ₹ 2 lakh for four-wheelers. The circular is based on directions the regulator received from the Madras high court.

Irdai has given insurance companies time till 25 October to file products, in accordance with the new guidelines.

What is compulsory personal accident cover?

A motor insurance policy has two parts. One is third-party liability cover, which covers loss of life or damage to a third party and is to be taken mandatorily, and the second is own damage cover, which covers damage to the insured vehicle and theft and is optional. The premium for third-party insurance is decided by the insurance regulator each year, while that for own-damage cover is decided by individual insurance companies.

According to the India Motor Tariff, 2002, a compulsory personal accident cover has to be part of the motor insurance policy. This cover is applicable in both cases: if a person buys only a third-party policy or a comprehensive policy which has both third-party and own-damage covers. The liability part in your policy document lists this as “PA cover for owner driver". An “owner-driver" is the owner of the insured vehicle having a valid driving licence, according to the India Motor Tariff. 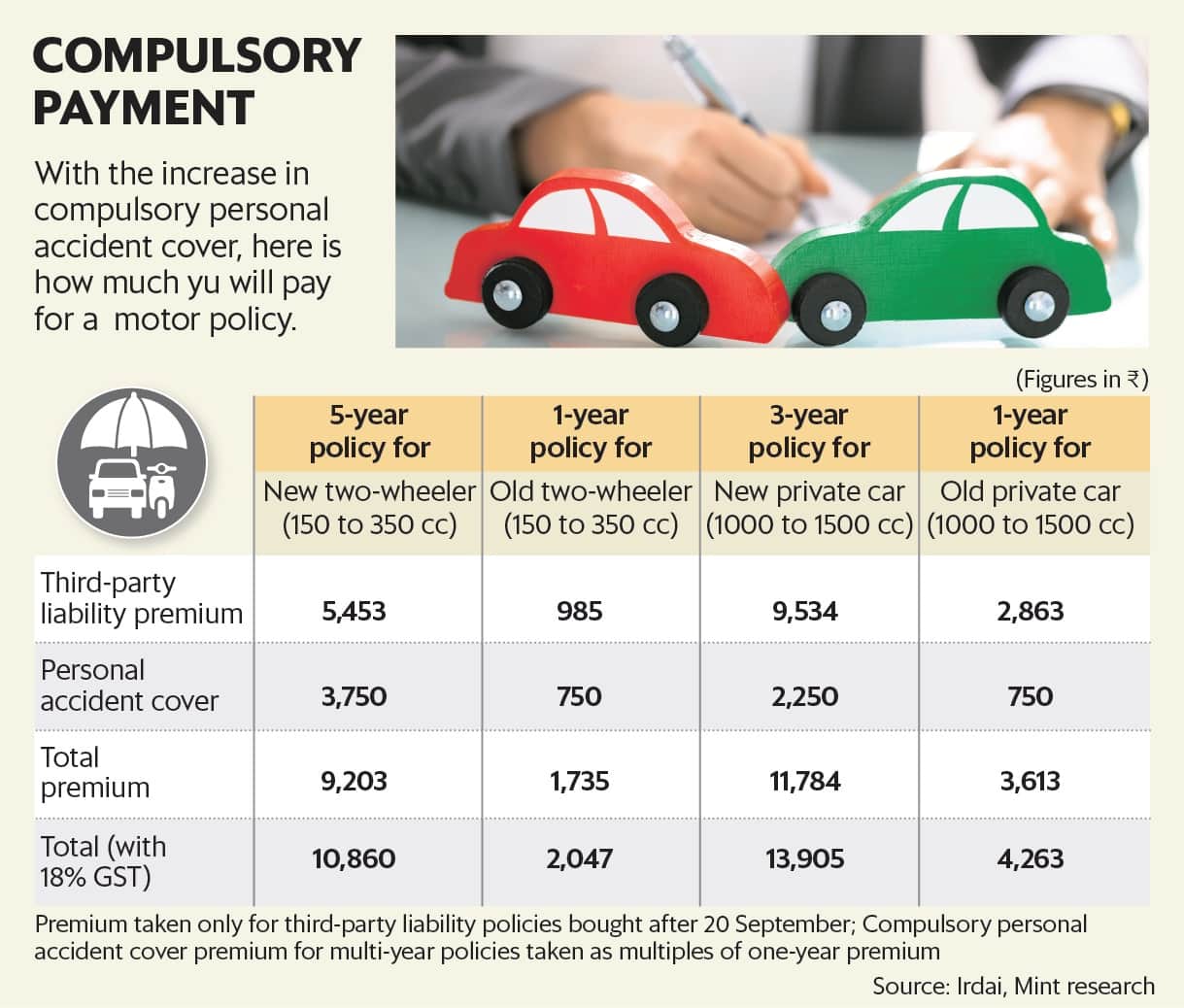 Until now, the premium for this compulsory personal accident cover was ₹ 50 for a two-wheeler for a cover of ₹ 1 lakh, and ₹ 100 for a private car or commercial vehicle for a cover of ₹ 2 lakh. Now, a uniform cover of ₹ 15 lakh is applicable for all two-wheelers, private cars and commercial vehicles at a premium of ₹ 750 (plus taxes). Insurance companies can also offer a higher sum insured for personal accidents as an add-on cover.

Only the registered owner-driver, in whose name the policy is issued, is entitled to this compulsory cover, provided the person holds a valid driving licence.

Hence, the cover cannot be granted where a vehicle is owned by a company. In this case, where personal accident cover can’t be granted to an individual, the additional premium can’t be charged, as per the India Motor Tariff.

Also, if the owner-driver owns more than one vehicle, the personal accident cover can be given for only one vehicle as chosen by the insured person. However, if the person meets with an accident from the second vehicle, the cover (taken along with the first vehicle) may be payable. For this, the owner, while buying the second car, has to submit a proof that a personal accident cover has already been bought for the first vehicle, which is also in his name.

What will be the pricing for multi-year policies?

From 1 September, multi-year third party policies have become mandatory for new private vehicles. New two-wheelers now need to get a policy for five years and private cars for three years. For such policies, insurance companies are currently charging premiums in multiples of one-year premiums.

“The directive has just come and the premium for compulsory PA cover for multi-year policies is being filed with the regulator. In case of multi-year policies, some price variation may be there subject to approval by the regulator," said Sanjay Saxena, head , motor claims and motor underwriting, Bajaj Allianz General Insurance.