Why the Ambuja Cement stock is least preferred among its peers

Ambuja Cement Ltd’s power & fuel and freight cost surged in the March quarter compared to a year ago. But that is the case pretty much with all cement companies especially after import duty on petroleum coke was hiked from 2.5% to 10% in December 2017 and also because of elevated diesel prices.

Though the company’s raw material cost declined on a year-on-year basis, it spiked by a huge 81% sequentially, consequently hurting operating margins.

However, unlike its competitors UltraTech Cement Ltd and Shree Cement Ltd, the company’s volume growth was muted at 6.22 million tonnes (mt) hit by capacity constraints and lower-than-expected sales due to unavailability of rakes in the east. 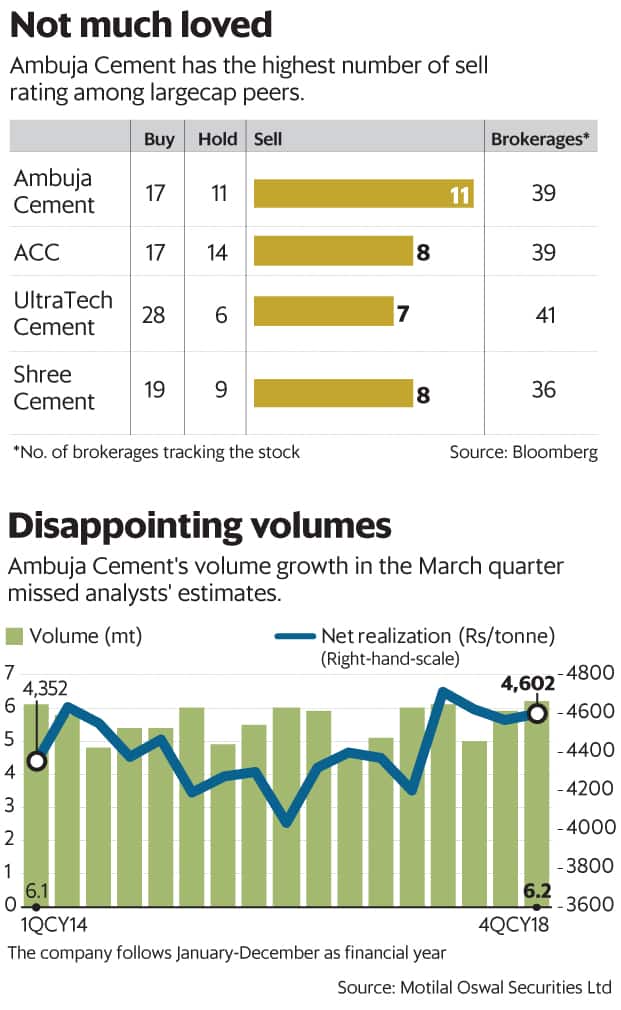 This is disappointing and comes at a time when volume growth of many cement makers is getting a boost from capacity additions.

The fact that UltraTech Cement and Shree Cement have been adding capacity by over 20% via organic and inorganic routes gives them an edge over Ambuja Cement. Also, it puts Ambuja Cement at a risk of losing market share in the medium-term.

While the company has proposed to set up a 3.1mt clinkerization plant at Marwar Mundwa in Rajasthan, the first phase of 1.7mt is expected to be commissioned only in the second half of fiscal year 2020, limiting the company’s volume growth until then.

Realizations did improve in the March quarter, but in the wake of medium-term capacity constraints, the expected improvement in the sector’s pricing scenario would be of little help, so analysts expect the company’s return ratios to remain subdued.

As for the stock’s performance, on a year-to-date basis, shares of Ambuja Cement have declined more than the aforementioned companies.

As the alongside chart shows, shares of the company have the highest number of sell ratings compared to its large-cap cement peers. No wonder, on a one-year forward price-to-earnings basis, the stock’s valuation is the lowest among pan-India cement makers.

Meanwhile, ACC Ltd while announcing its March quarter earnings said that it had limited the period of the master supply agreement (MSA) with Ambuja Cements for three years commencing from the date of its execution.

Further, both companies will have a right to terminate the MSA any time during the three year term by providing three months’ prior notice.

Although the company might see some cost savings from the potential synergies to be extracted from this MSA, absence of a significant growth plan is a key concern, which would restrict further upside in the Ambuja Cement stock.