Recently, I came across an interview of Berkshire Hathway’s vice-chairman Charles Munger (A Fireside Chat with Charlie Munger, Wall Street Journal, 12 September 2014) where he states the peril of value investing as espoused by Benjamin Graham—“picking up cheap, cigar-butt stocks". On Graham, whom Warren Buffett revered, Munger said, “I don’t love Ben Graham and his ideas the way Warren does. You have to understand, to Warren—who discovered him at such a young age and then went to work for him—Ben Graham’s insights changed his whole life, and he spent much of his early years worshiping the master at close range. But I have to say, Graham had a lot to learn as an investor. His ideas of how to value companies were all shaped by how the Great Crash and the Depression almost destroyed him, and he was always a little afraid of what the market can do. It left him with an aftermath of fear for the rest of his life, and all his methods were designed to keep that at bay.

“I think Ben Graham wasn’t nearly as good an investor as Warren Buffett is or even as good as I am. Buying those cheap, cigar-butt stocks (companies with limited potential growth selling at a fraction of what they would be worth in a takeover or liquidation) was a snare and a delusion, and it would never work with the kind of sums of money we have. You can’t do it with billions of dollars or even many millions of dollars. But he was a very good writer and a very good teacher and a brilliant man, one of the only intellectuals—probably the only intellectual—in the investing business at the time." 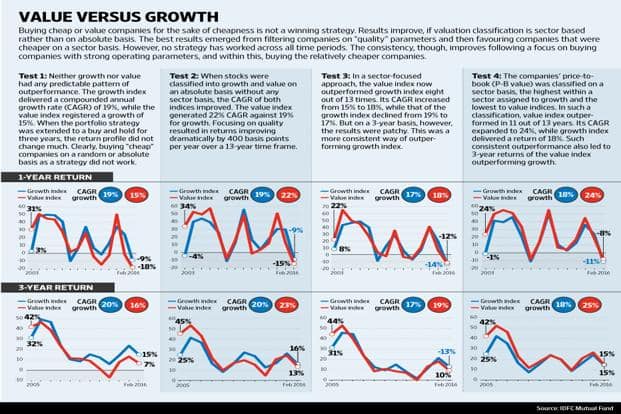 Among various investment styles, value investing has emerged as the most famous (also probably the most misused and abused). Given the scale, longevity and consistency of the track record of Berkshire Hathway, value investing has emerged as the most successful investment strategy. So, it’s no wonder that most professional investors would want to ascribe their investment success to it. In India, with its limited investment history (Nifty 50 index was created only in 1995, as against S&P 500 in 1957), value investing has always been regarded as the pure form of investing. Myriads of local practitioners of this style have emerged over the years. But so exclusive is this club that the media feted mutual fund industry fund managers are usually excluded from such groupings, a rare display of disdain to another ‘super’ tribe of investors. But that is another story for another day.

What is value investing?

Given the strong words used by Munger, value investing is not just clearly buying “cigar butts". While his personal track record is not as public as that of Buffett, his positioning, even as a long standing associate (or in his own words, a “side-kick") to the original legend makes his comments on Graham and value investing worthwhile to reconsider the original hypothesis of this style. In the Indian context, value investing has been used mainly as a tactical tool of buying cheap, beaten down stocks.

Emerging markets, like India, have always been identified for their superior growth. In such a market, would value investing work? Would it be the classical “cigar butt" style or the one ascribed by Munger and followed by Berkshire Hathway? To figure this out, we used the BSE 200 index. We used three different classifications to find out whether value investing works

We made a few assumptions. We excluded financial stocks from this study. Why? Because the performance of the low price-to-book (P-B) based financials, especially of public sector banks, has been so secular in its underperformance that any grouping of growth versus value would be one sided, with the higher priced P-B “growth" stocks outperforming for most years, except 2009 and 2010. Second, we used P-B value (and not price-to-earnings) as the valuation measure for classifying companies into growth and value. Third, portfolios were re-jigged each year on 30 June and then held without any turnover till the next year ending 30 June.

In the first test, stocks were stacked from highest P-B to lowest. A gap of 20% between the lowest valuation in the growth index and the highest valuation in the value index was maintained to separate companies into either growth or value index. As a result, the number of companies in each category was in a range of 70-85 out of the BSE 200 on market cap basis. The range of coverage was within 67-82% of the market cap of the index.

The results showed no pattern. Neither growth nor value had any predictable pattern of outperformance. The value index outperformed five out of 13 years on an annual basis. As per this methodology, growth index delivered a compounded annual growth rate (CAGR) of 19% from 2003 to 2015, while the value index registered growth of 15%. When the portfolio strategy was extended to a buy and hold for three years, as against one year, the return profile did not change much. Clearly, buying “cheap" companies on a random or absolute basis as a strategy did not work.

This methodology also clearly has a key lacuna as the outperforming sectors, especially since 2009—domestic consumption, healthcare and IT services—all have high P-B and would consistently feature in the growth index. To remove this lacuna, we aggregated companies on a sectoral basis. Companies were classified from highest to lowest on P-B within a sector and then assigned to either growth or value grouping. This gave both the indices representation from every sector.

The results based on a sector focused approach were dramatic. The value index now outperformed growth index eight out of 13 times. The CAGR of the value index increased from 15% to 18%, while that of the growth index declined from 19% to 17% over the previous classification. On a 3-year basis, however, the results were patchy—value outperforming growth five out of 11 times during this period. This was, compared with the previous approach, a more consistent way of outperforming growth index.

Next, we applied certain “quality" parameters to filter BSE 200 companies. These were graded based on the number of years they met the criteria and then classified into four quartiles, with those in the top three quartiles forming the universe from which companies were classified on growth or value index, based on their P-B.

The quality parameters were:

1. Debt to Ebitda (earnings before interest, taxes, depreciation and amortisation) less than 3

2.Operational cash flow (profit after tax plus depreciation less increase in working capital) divided by Ebitda being greater than 33%

The above filters were run from the period starting 2003 on an annual basis for 13 years. Companies were graded into three quartiles based on number of occurrences over this time period. Those that qualified nine out of 10 trailing years were in quartile1; those that qualified for four out of last five years were in quartile2; and seven out of trailing 10 years or three out of last five years constituted quartile3. All these companies became the universe from which they were then stacked based on their trailing 12 months’ valuation metric, P-B.

As earlier, we first classified into growth and value on an absolute basis without any sector basis. The value index outperformed growth eight out of 13 years. The CAGR of both indices improved. The value index generated 22% CAGR against 19% for growth. Clearly, focusing on quality resulted in returns improving dramatically by 400 basis points per year over a 13-year time frame. Importantly, such a selection also outperformed on 3-year holding. (One basis point is one-hundredth of a percentage point.) The value index outperformed seven out of 11 years, as against five out of 11 years in the previous two classifications.

Finally, we classified the P-B of “quality" companies on a sector basis, assigning the highest within a sector to growth and the lowest to value indices. Such a classification appeared to have hit the bullseye—value index outperformed in 11 out of 13 years. Its CAGR over this time frame further expanded to 24%, while growth index gave a return of 18%. Such consistent outperformance also led to 3-year returns of the value index outperforming growth 10 out of 11 years.

The other question that arises is whether there is a characteristic for the year in which value underperforms growth? One clear pattern that emerges is the importance of annual profit growth. Across all classifications, a key correlation was underperformance of value whenever profit after tax (PAT) growth of the index was significantly lower than that of the growth index. As this occurred in all four classifications, we could denote that the critical factor for outperformance of any grouping was driven more by PAT growth than valuation parameters. This reinforces the belief of India being a growth-oriented market.

The results of the test clearly highlight Munger’s views. Buying cheap or value companies for the sake of cheapness is not a winning strategy. Results improve, if valuation classification is sector based rather than on absolute basis. The best results emerged from filtering companies on “quality" parameters and then favouring companies that were cheaper on a sector basis. However, no strategy has worked across all time periods, either on an annual basis or a 3-year buy and hold basis. The consistency of returns, though, improves following a focus on buying companies with strong operating parameters, and within such a universe, buying the relatively cheaper companies. This gives added returns and a more consistent performance. Munger 1; Graham 0.