OTHERS : Mumbai: Indian shares gained on Wednesday after a rollercoaster ride in the afternoon session, extending gains for the third session led by FMCG, telecom and private banks stocks. After briefly turning red, the BSE Sensex closed 231.98 points, or 0.64%, up at 36,212.91, and the Nifty 50 ended 53 points, or 0.49%, higher at 10,855.15. Moreover, positive cues from global markets and continued buying by local investors also boosted sentiment. Investors turned their focus to December-quarter earnings, with IT majors TCS and Infosys reporting their results later this week.Underperforming the benchmark Sensex, the BSE midcap and smallcap indices were down 0.04% and 0.17%, respectively. Among the sectoral indices on BSE, FMCG rose most at over 1% followed by bankex, realty, finance and auto, which rose 0.5% to 0.9%. On the other side, oil and gas and metal fell most at over 1%. Utilities, basic materials and energy also declined.Axis Bank, ITC, Tata Motors, HDFC, Bharti Airtel and IndusInd Bank were among the top gainers on the key indices, whereas Yes Bank, Tata Steel, HPCL, Hero MotoCorp, ONGC and BPCL were among the major losers.In global markets, shares from Europe to Asia advanced, along with US futures on fresh hope for an end to the trade disputes between the US and China. Stock markets in Hong Kong, South Korea and Japan also rose. Oil prices extended gains and rose around 1% over Us-China trade talks. Here are the latest updates from the markets: 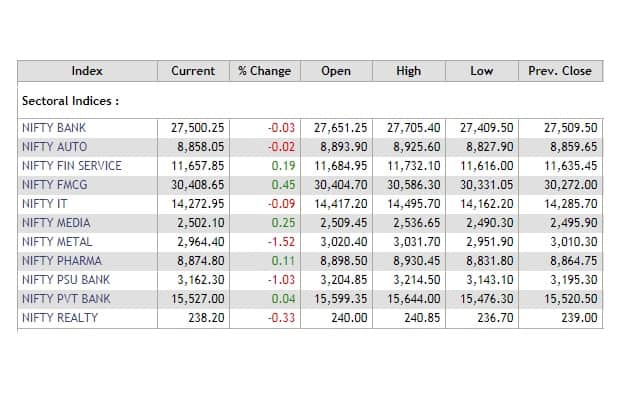 Will TCS be the best performing Sensex stock in 2019?

The TCS stock returned 40.2% in 2018, emerging as the second best performing scrip behind Bajaj Finance in the Sensex.https://t.co/J2SUoUUf1Q

Shriram Transport Finance said its board will consider raising funds through issuance of bonds and public issues of NCDs. It will issue bonds in tranches from February 01, 2019 to April 30, 2019. Shares traded 0.6% up at Rs 1197 per share

Tata Steel shares rose over 1% in the opening trade, but soon the stock fell as much as 2.43% to Rs 479.40 per share. Tata Steel said on Tuesday lower production in Europe will impact its financial results, ahead of a planned merger with Germany’s Thyssenkrupp. Production from its European plants fell 12.7% to 2.33 million tonnes for the third quarter ended December 31. Shutdowns and operational issues at IJmuiden plant in the Netherlands and Port Talbot in Wales hurt the company’s performance in the quarter, Tata Steel said.

Tata Motors shares up over 1%

Yes Bank shares trade lower ahead of board meeting

Jet Airways shares traded 0.5% lower at Rs 244 per share. The stock fell as much as 1.3% to Rs 241.95 per share in opening trade. Local lenders to Jet Airways, led by State Bank of India (SBI), on Tuesday proposed a $900 million resolution plan, comprising fresh equity infusion and restructuring of $450 million of its loans, Mint reported, citing two people directly aware of the development. The Jet Airways’ turnaround plan, if approved by all stakeholders, will trigger a change in Jet Airways’ shareholding, with founder chairman Naresh Goyal’s stake falling below the current 51%. Read more

Infosys shares rose as much as 2.8% to Rs 688.70 per share after the IT company said it will consider proposals for share buyback and special dividend during its board meeting on January 11.

Rupee edges higher against US dollar

The Indian rupee strengthened marginally against the US dollar, tracking gains in Asian markets as increasing optimism the US and China will be able to defuse their trade war outweighed a worsening global growth outlook. At 9.10am, the rupee was trading at 70.13 a dollar, up 0.09% from previous close of 70.20. The home currency opened at 70.06 a dollar. The 10-year bond yield was trading at 7.53% from its Tuesday’s close of 7.532%.

On Tuesday, FIIs sold shares worth 553.78 crore on net basis, while DIIs bought equities to the tune of Rs 698.17 crore, according to provisional data from NSE.

Bandhan-Gruh Finance merger favours HDFC, no one else

Bandhan Bank Ltd’s merger with Gruh Finance Ltd appears to be a deal that was born out of compulsion and is anything but sweet for minority shareholders of the bank and the mortgage lender, analysts said. The crash in share prices of Bandhan Bank and Gruh Finance following the merger announcement points to that effect. In the past two days, Bandhan Bank has dropped by around 10% to ₹477.05 on BSE, while Gruh Finance, controlled by Housing Development Finance Corp. Ltd (HDFC), has plunged by around 20% to ₹256. Read more

Q3 results unlikely to provide much cheer to investors

The December quarter may turn out to be yet another forgettable one for Indian investors as commodity downturn, liquidity crunch and declining government spending combine to depress earnings growth. According to analysts, growth in the October-December quarter, or Q3, is likely to be tepid overall, though a weaker rupee and softer commodity prices could help some sectors. Oil and gas companies are expected to suffer inventory losses, while banks gain from lower provisions. Read more Oil prices rose, extending gains from the previous session on hopes that Washington and Beijing can resolve a trade dispute that has triggered a global economic slowdown. US WTI crude oil futures were at $50.29 per barrel as at 0131, up 51 cents, or 1% from their last settlement. It was the first time this year that WTI has topped $50 a barrel. International Brent crude futures were up 42 cents, or 0.7%, at $59.14 per barrel. Both crude price benchmarks had already gained more than 2% in the previous session.Gold held steady as a surge in risk appetite on hopes of a Sino-U.S. trade deal offset support from expectations of a pause in U.S. Federal Reserve rate hikes. Spot palladium, meanwhile, notched up a new record high on Wednesday at $1,330 per ounce due to tight supplies. Spot gold was little changed at $1,285.62. US gold futures were also steady at $1,286.70 per ounce.Metals: Most base metals rose in early Asian trade, buoyed by a report that top metals consumer China would try to boost spending on autos and home appliances this year, as well as signs of progress in Sino-U.S. trade talks. Three-month LME copper rose 0.9% to $5,959.50 a tonne, after slipping 0.3% in the previous session. The most-traded March copper contract in Shanghai nudged up 0.7% to $6,973.58 a tonne. Most other base metals also climbed, although Shanghai aluminium edged down 0.1%. Shanghai nickel and zinc both added more than 1%. Reuters

Share Via
Close
No Network
Server Issue
Internet Not Available