The Reserve Bank of India’s (RBI) consumer confidence survey is important because confident consumers buy more goods and services, providing a boost to the Indian economy. But it’s also a barometer of how happy people are with the government’s management of the economy. With the 2019 Lok Sabha elections so near, could the consumer confidence survey provide some clues to the political future?

Let’s take people’s perception about their employment prospects first. In December 2013, a few months before the last general elections and soon after the taper tantrum that unsettled India’s economy, only 29.1% of those surveyed said their economic condition had improved from what it was a year ago, while 34.4% said it had worsened. The rest said there had been no change in their job prospects. The net response, or those who thought their job prospects were brighter than what they were a year ago minus those who thought they were bleaker, was a negative 5.3 percentage points. 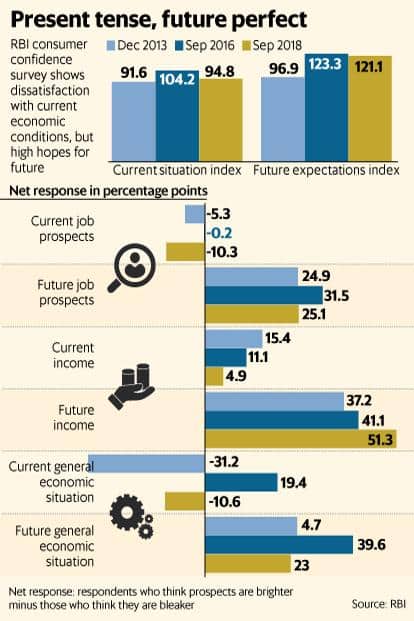 What is the situation now? In the September 2018 RBI survey, 35.2% said their employment prospects had improved, while 45.5% said they had worsened. The net response is a negative 10.3 percentage points, far worse than in December 2013.

On inflation, the net response in September 2018 is better than in 2013. The perception of the economic situation is also better. The details are given in the accompanying chart. Note that this survey is done in six big cities, so it is a gauge of sentiment in metropolitan India, and not small towns and villages. Also, note the deterioration in sentiment compared to that in September 2016, before demonetisation started.

Indeed, the government has done a remarkable job of keeping people’s hopes alive. The risk for the government is that current reality may finally dampen future expectations, which is what seems to be happening in the markets.