Home / Market / Stock-market-news /  Demonetisation comes to haunt govt as RBI says 99.3% notes back
Back
Share Via

Demonetisation comes to haunt govt as RBI says 99.3% notes back

All but 10,720 crore of the 15.4 trillion returned, indicating the note ban hasn't worked as desired

Mumbai: The central bank’s post-mortem of the invalidation of high-value currencies in November 2016 is in: All but ₹ 10,720 crore of the ₹ 15.4 trillion is back in the banking system, indicating that the government’s shock move to deal a body blow to black money hasn’t worked as desired.

The government had then argued that at least ₹ 3 trillion of the old currency will not be returned to the banking system for fear of scrutiny.

A finance ministry official tacitly admitted as much in an incredulous response to a question at a press conference convened at North Block, which houses the finance ministry. “I think demonetization has achieved its objectives quite substantially," said Subhash Chandra Garg, secretary of department of economic affairs, and then added, “How is not the question. If you have a counter-narrative just tell me."

For the record, RBI’s annual report for 2017-18 says that upon completion of the verification and processing of banned notes, ₹ 15.3 trillion worth of specified bank notes have been returned to banks.

Expectations that the proportion of high-denomination notes in circulation would decline have also been belied. 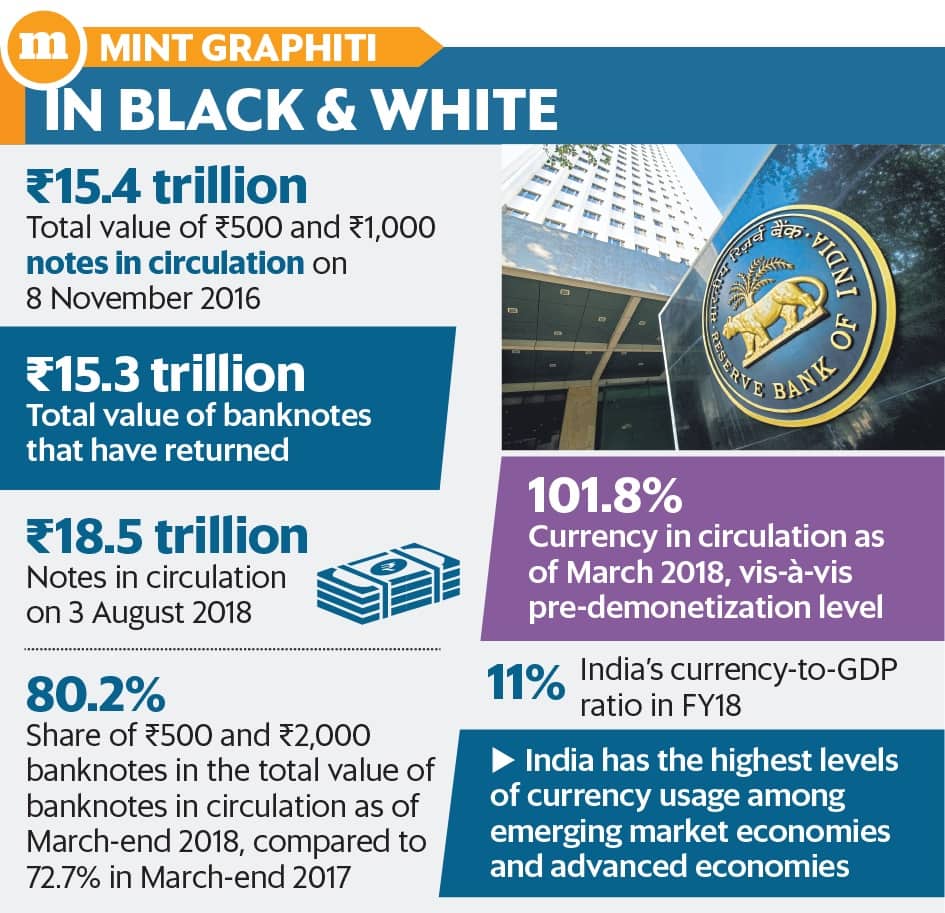 “The primary objective of demonetization was to account for the cash and not to deprive people of value," said R. Gandhi, a former deputy governor of RBI. “But for demonetization, the proportion of high-value currency would have gone up to 95%. Instead, it has been arrested at 80%."

“It (return of most currency notes) comes as no surprise. Very little of unaccounted wealth is kept in cash. Most of it goes into real estate, gold and stock market," said Pronab Sen, former chief statistician of India. “We have been taking several measures to address the problem of unaccounted wealth and money laundering. Seeding Aadhaar with bank accounts is one of the effective steps taken," he added.

Even while the Congress and the Bharatiya Janata Party (BJP), which heads the National Democratic Alliance, exchanged accusations, the troubling question that persists is—what went wrong? Remember, electorally, despite the best efforts of the opposition, demonetization was a force multiplier in the Uttar Pradesh elections, which followed soon after demonetization—BJP won a record 312 seats in the 2017 assembly polls.

The assumption of the Union government and RBI about black money stocks, in hindsight, appears flawed.

While no one disputed the existence of black money, most are taken aback by how it was laundered and returned to the banking system.

Gireesh Chandra Prasad in New Delhi contributed to this story

Gopika Gopakumar has worked for over 15 years as a banking journalist across print and television media. Her expertise lies in breaking big corporate stories and producing news based TV shows. She was part of the 2013 IMF Journalism Fellowship Program where she covered the Annual & Spring meetings of the International Monetary Fund in Washington D.C. She started her career with CNBC-TV18, where she also produced a news feature show called Indianomics and an award winning show on business stories from South India called Up South. She joined Mint in 2016.
Read more from this author
Catch all the Business News, Market News, Breaking News Events and Latest News Updates on Live Mint. Download The Mint News App to get Daily Market Updates.
More Less
Topics
demonetisation mint-india-wire
OPEN IN APP