Lack of awareness and difficult access are the main hurdles

InterMedia’s report, Financial services use and emerging digital pathways, focuses on the access and use of banking services and mobile money services; as well as triggers and barriers for potential uptake. It expands to include the current standing of digitized government payments as well.

The report includes two surveys—Tracker Survey and Digitized Government Payments Study. The Tracker Survey is a nationally representative survey included 45,024 Indian adults, ages 15 and older. It was conducted between 15 October 2013 and 18 January 2014, on access and use of financial services, as well as barriers and potential for future use. All percentages in this report are weighted to reflect national-level proportions.

The Digitized Government Payments Study is a qualitative study with government-payment beneficiaries across four districts in Maharashtra conducted during the 13-23 December 2013 period, focusing on the potential for digital government payments to expand financial inclusion.

Poor/below poverty line —In this report, “poor" adults, or those living below the poverty line, are defined as those living on less than $2.50 per day, as classified by the Grameen Progress out of Poverty Index.

The financial services market in India is characterized by a high reliance on cash. Across all demographic groups, the majority of people use cash for a range of transactions.

More than 90% of those who receive remittances and wages for a job do so through cash. Direct deposits to bank accounts and cheques are more common in urban centres and among wealthier respondents. In the most populated cities of India (Delhi, Mumbai and its greater suburban areas, Pune, Hyderabad, Ahmedabad and Bangalore), 13-31% said they receive their wages through direct deposit to their bank accounts.

Banks are seen mostly as a venue for savings—70% of those who save money do so in a bank and 35% at home. To borrow, most people (67%) rely on those within their personal networks, including relatives, neighbours and friends. Only a small 11% said they borrow from a bank. State-owned banks enjoy a high level of trust—72% said they “fully trust" state-owned banks.

Based on both spontaneous and prompted recall, only 6% of the respondents were aware of any mobile money products. This awareness is significantly higher among those above the poverty line.

In recent years, the central government and some state governments have begun transferring welfare and benefit payments directly into beneficiaries’ bank accounts to ensure accountability, and safe and complete delivery of payments. The response to these measures has been mixed.

Only 12% of survey respondents (90% are below the poverty line) said they received payments from the government (excluding government salary payments).

While the majority of payments are received in full, 13% recipients said they had to pay bribes to receive their payments. Beneficiaries, however, see advantages of receiving payments directly into their bank accounts, including fewer delays and full receipt of payment, and are keen to know more about it.

The process of switching to this system, however, needs to be made easier and more efficient. Also, the awareness has to be improved. Beneficiaries have to be incentivized to reduce payment cash-outs and to use linked digital products. Banks also need incentives to design and market products to such account holders.

Edited excerpts from ‘Financial services use and emerging digital pathways’ by InterMedia India. 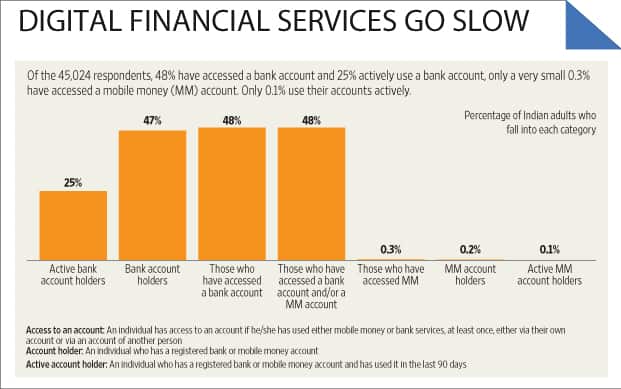