KYC form has changed; fill the right one

From 1 August, MFs won't accept applications if 'additional' details are not furnished

The clunky know-your-customer (KYC) forms continue to undergo finer changes. Mutual funds (MFs) are now asking you to fill up one more form, even though you may have already done your KYC. As per a requirement specified by the Securities and Exchange Board of India (Sebi) in December 2013, you now need to furnish your income details in a separate form to your fund house, instead of mentioning it in a KYC form that was prevalent earlier. In simpler words, your KYC form has changed and you will now need to furnish your income details to your fund house directly, even if you had submitted them earlier as part of your KYC compliance.

KYC form is now split up

Up until last year, your KYC form asked all sorts of details from you and was lengthy. Apart from basic details such as your name and address, it also asked you your annual income, net worth and whether or not you are associated with politics.

Remember, all these details were earlier kept with the KYC registration agency (KRA).

“It was felt at the regulator’s level that details such as income level and an investor’s association with politics (asked earlier) are not required to be KYC-compliant. Income level details, especially, are required by fund houses to check if the amount invested is consistent or not with an investor’s disclosed income", said a senior fund official who did not want to be named.

As per government rules, financial service firms such as MFs, banks and insurance companies must regularly submit a suspicious transaction report to the Financial Intelligence Unit, a government agency that analyses and disseminates information relating to dubious financial transactions.

The person quoted above adds that here’s where the data pertaining to our income is used—the KYC process does not really require our income levels.

So in October 2011, Sebi divided the KYC form (for all stock market intermediaries such as MFs, portfolio managers, and so on; it had already done the same for depository participants earlier) into two parts.

The essential portion remained in part I (the main form) while other information—if at all fund houses wanted to capture anything more—was relegated to another form (part II). However, the income levels continued to be in the main form; fund houses never really came out with a part II form. Moreover, the same ruling also made the KYC form (part I) uniform across all market intermediaries. 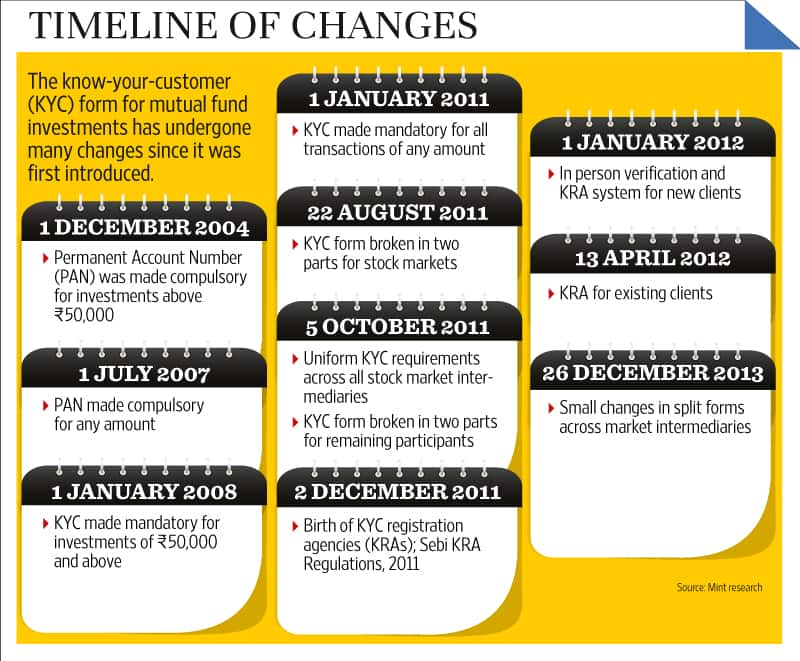 Let’s tackle the easy part. If you have not yet done your KYC and wish to invest in an MF, you will now have to fill two forms (part I and part II). Part I is your basic KYC form that you need to fill and is the same if you invest through a mutual fund, depository participant, portfolio management services, and so on. Part II form (supplementary KYC form) is something that fund houses have come out with to capture your income details.

But, most fund houses have now started to do away with this form and have revised their application forms to capture the extra information.

If you are an existing investor, it gets a bit confusing. Some distributors told us that initially fund houses were not accepting application forms if investors did not separately submit part II, despite being KYC-compliant and through a KRA (with an updated KYC). “One of the largest fund houses recently rejected an application form of one of my clients because when we submitted the forms we did not know about the supplementary form. I had to get my main distributor to intervene and talk to the fund house to try and explain that my customer is already KYC-compliant. Eventually, the fund house accepted the form", said Parul Maheshwari, a Mumbai-based distributor. Maheshwari is a sub-broker of a large national distributor.

Most fund houses told us that they are making efforts to capture the data from their clients (existing investors who make further investments), but aren’t rejecting forms as yet. “However, from 1 August, we will not accept any applications, even from existing investors and also from those investors who are already KYC-compliant, if they do not give us the additional data (income levels and whether or not they are connected to politics). Till then, we will accept forms because we can’t suddenly impose the rule on investors and distributors. Eventually, we will write to all our existing investors and request them to share the data," said the head of the customer service department of a large fund house.

These are still early days and fund houses are grappling. Here’s what we could broadly gather from our interaction with the fund houses.

Existing investors, same fund house, on-going investment: Do nothing, unless the fund house specifically asks you.

On-going systematic investment plans: Do nothing, unless the fund house specifically asks you.

First-time MF investors, new fund house, new investment: You will need to fill up an application form (revised format) that will capture your income details.