The year 2018 saw a change of guard at the Insurance Regulatory and Development Authority of India (Irdai). After industry insider T.S. Vijayan’s five-year term came to an end, former bureaucrat Subhash C. Khuntia took office in May. Under Khuntia, Irdai’s most prominent task has been to relook at insurance products—life, health and motor. In that sense, this year can be seen as the founding year of important reforms the industry is likely to witness.

From a regulatory standpoint, the work on reviewing insurance products moved ahead a few inches. In 2017, Irdai set up a product committee to review product regulation and one of the main concerns of the committee was high surrender costs in traditional plans that also bundle up as investment products.

Taking the work forward, Irdai set up a working group in July this year and in October came out with draft guidelines that eased surrender penalties but only slightly. While this would be seen as a missed opportunity to tackle the problem of high surrender costs in traditional plans that dominate the market currently, the draft gave a new lease of life to unit-linked pension plans by making them more flexible in offering partial withdrawals and a higher take-home on maturity. It also increased the revival period of a lapsed traditional policy from two to five years.

“This is a positive step and if implemented it will proactively encourage the industry to curb lapsation by convincing the policyholders to revive their policies. For an industry where lapsation is a real threat, this is a welcome move," said Pankaj Razdan, managing director and chief executive officer, Aditya Birla Sun Life Insurance Co. Ltd and deputy CEO at Aditya Birla Capital. 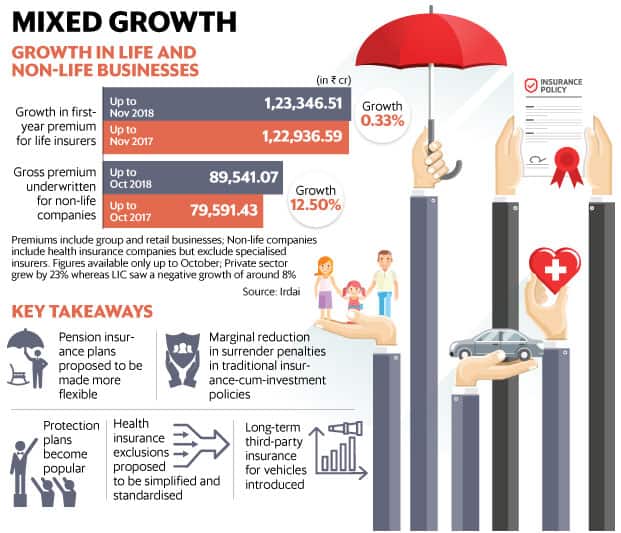 From an industry standpoint, two events that were prominent in 2018 were increasing focus on protection plans and the use of technology to smoothen sales and customer service. “The average sum assured in the industry increased by 25% and this is a huge plus given the lack of social security and the huge insurance gap India has. There is now a prominent mindset shift and protection solution has become dominant," said Razdan. “Every single insurer is focussing on it whether it’s life insurance by customising and innovating term plans or health insurance by offering disease-specific insurance plans," he added.

Of course, the advent of technology has a role to play as well. According to Vineet Arora, managing director and chief executive officer, Aegon Life Insurance Co. Ltd, the advent of technology gave term insurance policies a huge push as a result of which now there is awareness and people have started appreciating the need. “Gradually we will see other types of life insurance policies available for sale online. However, this year the industry integrated technology in a big way to make the sale process smooth whether it’s agent assisted sale or direct to customer. This trend is here to stay and will only become more prominent in the future," he said. In fact, even the regulator is closely watching how technology can help insurers—for instance, the role of telematics in profiling and rewarding customers. Action in this space is only going to get better next year.

In July this year, Irdai set up a committee to look at standardising exclusions in health insurance. The committee submitted its report which not only proposed a much sharper and unambiguous definition of pre-existing ailments, one of the main clauses that lead to claims rejection, but also recommended that insurers can’t deny a claim on ground of non-disclosure after an eight-year window.

“I would call the year 2018 as the year of consolidation as the focus was on tying up the loose ends. For instance, this year in the health insurance space the focus has been to simplify and standardise exclusions which will go a long way in customer understanding and will aid customer protection. This year also saw new insurers focused only on digital and has given a push to e-commerce. The regulator also took steps to create a conducive environment for technology," said Tapan Singhel, managing director and chief executive officer, Bajaj Allianz General Insurance Co. Ltd.

According to Mehta, 2018 will also be seen as the year where the judiciary looked at insurance deeply. “Various judicial courts passed orders specific to insurance, whether it was reviewing exclusions in mental health or offering long-term third-party motor insurance cover. So even the courts have been pro-active in plugging perceived shortfalls in insurance," added Mehta.

While there may not be big bang events to report in the insurance space, this year can be seen as a year of tweaks to make the markets more mature.