Inox: waiting for the next blockbuster

There can be only one Baahubali and one Bajrangi Bhaijaan. Or so, investors of Inox Leisure Ltd seem to think. What could explain the 9% drop in Inox shares, after the company announced broadly in-line September quarter financial results on Friday then?

Analysts attribute the fall in stock price to two factors. One, some profit booking may have happened after the sharp outperformance since the June quarter earnings. Inox shares had increased as much as 37% since it announced spectacular June quarter numbers till Thursday last week.

Secondly, and more importantly, the best for this year may be behind it. Though the content pipeline appears strong, a repeat of FY16’s first half performance is a tall ask. Apart from Baahubali and Bajrangi Bhaijaan, which did exceptionally well in the first half, Piku, Tanu Weds Manu Returns and Welcome Back, too, did well. This quarter has started on a relatively low note, with movies such as Shandaar delivering a weaker-than-expected performance initially.

Operationally, Inox fared well in the September quarter, helped by higher footfalls and an increase in the average ticket price (ATP) (see table). 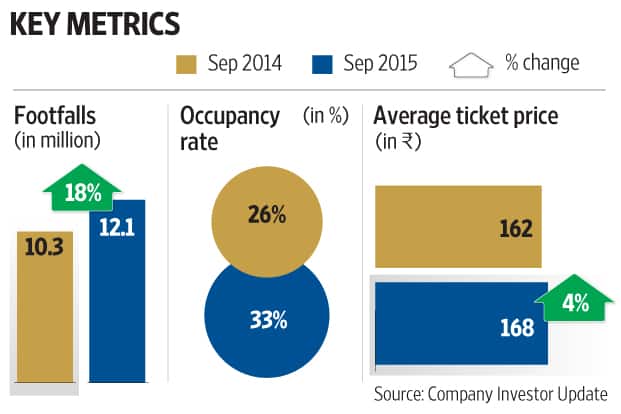 Revenue increased by one-third, year-on-year, to ₹ 355 crore, as contribution from gross box office and food and beverages increased, given the 36% jump in both segments. A decline in some cost components—exhibition cost, employee expenses, rent—as a percentage of revenue facilitated a 210 basis points improvement in operating profit margins to 15.9%; albeit lower than the 18.8% seen in the June quarter. One basis point is one-hundredth of a percentage point.

What next? Inox’s screen addition pipeline is strong and that should support revenue growth. For the rest of the year, it intends to add 42 screens holding 8,629 seats, taking the total screens to 435 and seats to 111,414 by this year-end. Subsequently, it has a project pipeline of 185 screens and 39,291 seats. Further, low leverage with a debt-to-equity ratio of 0.3 times is comforting. Currently, Inox’s shares trade at 21 times next year’s estimated earnings. In general, a pick-up in discretionary spending augurs well for multiplex stocks. But much more depends on the performance of films, which is unpredictable. The extent to which valuations can expand will depend on how many releases have blockbuster potential. For now, it’s a wait and watch.