IUC cut pulls down share prices of Bharti Airtel, Idea Cellular, Reliance Communications by 6.2%, 7.4% and 4.2%, propels those of RIL to record high of Rs872.10

Mumbai: Shares of telecom companies were under pressure on Wednesday after the Telecom Regulatory Authority of India (Trai) reduced to 6 paise per minute from 14 paise effective 1 October while fully scrapping the termination rates starting 1 January 2020.

Share prices of Bharti Airtel Ltd, Idea Cellular Ltd and Reliance Communications Ltd slumped 6.2%, 7.4% and 4.2%, respectively, while those of Reliance Industries Ltd, which owns Reliance Jio Infocomm Ltd, hit a record high at Rs872.10 (up 3.8%) intraday on Wednesday. However, shares of Bharti Airtel recovered towards late trading to end flat as most analyst suggest buying Bharti at lower levels due to its strong fundamentals. 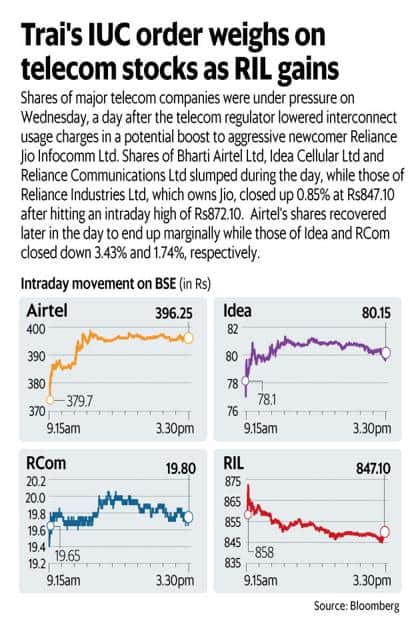 Most analysts expect the move to bolster margins for the new telecom entrant Jio and loss for incumbents. Bank of America Merill Lynch sees Bharti’s consolidated earnings before interest, tax, depreciation and amortisation (Ebitda) to be impacted by 2-5% and Idea’s Ebitda impact to be 4-13% till FY21. The research firm estimates Bharti and Idea’s Ebitda to slip by 6-15% beyond FY21.

According to Bank of America Merill Lynch, the move to a bill and keep (BAK) regime in the coming years would force existing telecom companies to upgrade their ‎networks to VoLTE to reduce cost. “Among incumbent telcos, we find Bharti to be best placed and our checks suggest that Vodafone and Idea are 6-9 months behind Bharti in launching VoLTE. While in theory, smaller telecom companies would benefit from the IUC cut, we think they will be worse placed in the longer term as they would unlikely be able to launch VoLTE (and accelerate consolidation)," Bank of America Merill Lynch added.

According to Morgan Stanley, lowering of interconnect rates will primarily benefit smaller operators who are net payers of interconnect charges than the large incumbents who are net receivers of interconnect charges. It estimates full year impact of 5% Ebitda decline for Bharti’s India wireless business, 3% decline in its consolidated Ebitda and 40% decline in its net profit. “Reliance Jio will be a key beneficiary of the IUC rate cut due to its higher skew of outgoing off-net calls. In Q1 FY18 interconnect costs for Reliance Jio stood at Rs2,100 crore. With cut in IUC rate, we estimate 76% upside to its FY19 Ebitda and Rs54 per share gain for it assuming the rate cut benefits are retained," Morgan Stanley added.

Stating that the move will likely have less absolute impact on Idea than on Bharti, Goldman Sachs has cut Ebitda estimates of the latter by 2-4% for FY18-20. It said that the cut in IUC will negatively affect Bharti’s annual cash flow by $150 million though it expects the company to stay free cash flow positive in FY18 and FY19. It has reduced Idea’s FY18-20 Ebitda by 6-10% and thinks it will have $250 million of negative free cash flow in FY18.

According to Goldman Sachs, the move will aid Reliance Jio to generate an additional $200-450 million of Ebitda during FY18-20. It has revised FY19 Ebitda margin for Jio to 27% from 19% previously. However, it said that any further weakness in Bharti should be seen as an even more attractive opportunity to add to positions as its fundamentals are intact and the company is well-placed to compete in the wireless market.