Wheat selling below support price, puts govt in a quandary

Wheat selling below support price, puts govt in a quandary

Chandigarh: For the first time in six years, the open market price of wheat is lower than the minimum support price, or MSP, the price at which the government assures farmers to avoid distress sales. 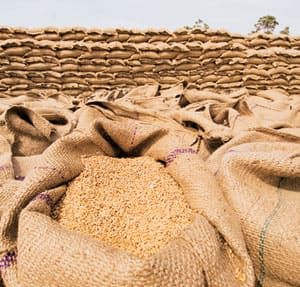 Abundant produce? The total wheat stock with the Union government as on 31 August was 23.25mt, out of which the state governments and their agencies held 13.4mt while FCI held 9.69mt. Ramesh Pathania / Mint

But the availability of plenty of wheat could also dampen inflationary pressures in the economy. India’s inflation for the week ended 20 September was 11.99%.

Observers actually attribute the decline in open market prices to aggressive buying in April-June by the Food Corporation of India (FCI), the Central agency that procures on behalf of the government.

“Huge storage with the government has led to a situation where private sellers do not have the capacity to influence market rates," said Charanjit Singh, a seller at Khanna grain market near Ludhiana in Punjab.

Traditionally, as the supply of the grain shrinks during the October festival season, the prices of wheat are higher than the MSP.

While the Union government procured wheat at Rs1,000 per quintal in April-June, the current market price is at Rs930-970 in various markets of Punjab and Haryana, states that jointly contribute almost 90% to the Central pool of wheat.

Wheat is a rabi (winter) crop that is sown in the month of October to November.

This year, as a result of its high MSP, the government could procure a record amount of wheat. The total wheat stock with the Union government as on 31 August was 23.25 million tonnes (mt), out of which the state governments and their agencies held 13.4mt, while the FCI held 9.69mt.

This is the second time the total wheat procurement in the country has crossed 20mt—the first was in 2001-02 when it touched 20.2mt.

Private buyers could buy only some 5% of the total wheat procured this year (April-June) compared with 18% a year ago, according to Central government figures released in July.

Singh said wheat prices in the markets have always been above the MSP during the preceding years.

Last year, wheat was being traded at Rs950 a tonne, though the MSP was Rs850 a tonne.

While the wheat price at Khanna mandi is at Rs970-980 per tonne, the rates at Hoshiarpur and Amritsar in Punjab and Pehowa in Haryana are in the range of Rs930-950.

The national president of the Bhartiya Kisan Union, Bhupinder Singh Mann, maintains that if the embargo on wheat exports is lifted, the prices of the commodity would rise again.

It was the global increase in wheat prices last year that prompted the Indian government to move for a massive wheat purchase this year.

However, since April, the prices of wheat have been fallen in the global markets at well. According to the International Grains Council, red wheat variety, which was selling for $351 per tonne last year, is down to $307 per tonne this year.

The price sentiment has also fallen due to increased global production of wheat, especially in the northern hemisphere.

Wheat output, which had witnessed a decline during the preceding years, has picked up globally.

Bikram Singh Virk, a specialist on food trade at the Government College, Kapurthala, said it is time for India to enter the export market once again. “The current global wheat price of Rs1,450-Rs1,500 is still 40-50% higher than the MSP at which Indian government purchased the wheat," he said.

“Since the government has already done its procurement and there is surplus supply, it is only the private players who are picking up wheat these days. And they probably don’t to pay as much as the MSP... Anyway, this is a lean season," said an FCI official who didn’t want to be named.

Sangeeta Singh in New Delhi contributed to this story.