One of the key reasons for the spike last month is the Reliance Communications Ltd and Aircel Ltd mega merger valued at $3.6 billion

M&A (mergers and acquisitions) deals touched a 22-month high of $5.6 billion in September, according to Grant Thornton India Llp.

One of the key reasons for the spike last month is the Reliance Communications Ltd and Aircel Ltd mega merger valued at $3.6 billion.

Increasing competition from Bangladesh and Vietnam coupled with the passage of the Trans-Pacific Partnership (TPP) trade agreement would keep India’s apparel exports moderate, CARE Ratings said in a report.

TPP would create a free trade zone among its 12 member nations. Despite this, the rating agency believes that India has the scope to boost its share in global apparel exports pie, courtesy an expected increase in Chinese apparel prices along with China’s reduced focus on this segment.

Also, what keeps Indian apparel exports relatively protected is the fact that China, the largest apparel exporter in the world, is not a party to TPP.

Latest data on goods movement in the major ports of India suggests that economic recovery is stronger and that the shipping industry could be reviving.

Major Indian ports handled about 50.7 million tonnes of cargo in September, a growth of 8.1% from a year ago.

The quantum of iron ore handled rose the most, followed by petroleum, oils and lubricants, and other liquids. 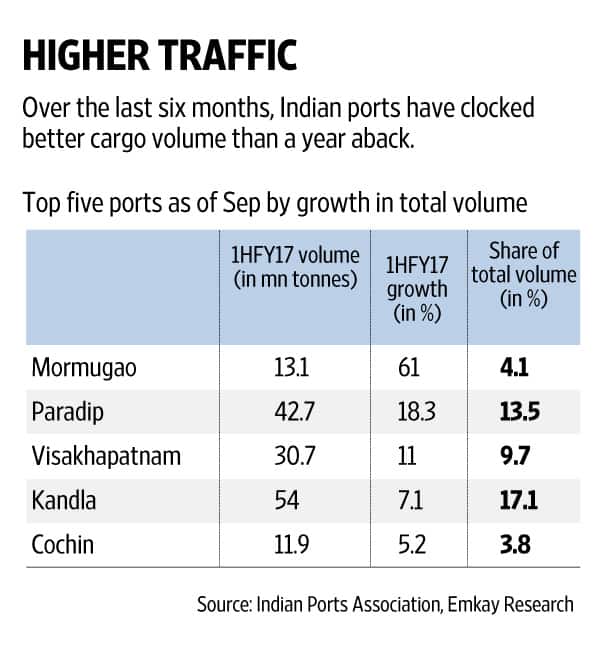 However, cargo movement in other areas including coal and fertilizers, and containers declined.

Interestingly, this correlates with the growth trajectory seen in the eight core sectors in the recent past, when coal and fertilizers did not do too well.

Meanwhile, ports on the west coast fared well, with Mormugao registering a 61% growth.