Thanks for Visiting Mint
You seem to have an Ad Blocker on. Please turn it off in order to continue, or whitelist Mint
HOW TO TURN OFF AD BLOCKER
OR
REFRESH IF YOU ALREADY TURNED OFF THE AD BLOCKER
Home >Market >Mark-to-market >Post Reliance Jio, India’s mobile industry officially shrinks by a third

While Reliance Jio's entry into India's telecom industry has been a bonanza for consumers, it is a nightmare as far as profitability of the sector goes

The Telecom Regulatory Authority of India’s (Trai’s) performance indicator report for the March 2018 quarter shows that the industry’s woes continue. Kotak Institutional Equities points out in a note to clients that consumer-level wireless spends (including service tax) fell to ₹ 29,800 crore in the March quarter. That’s down from a peak of ₹ 44,700 crore in the June 2016 quarter, the last ex-Reliance Jio quarter. As such, the reduction in wireless bills works out to ₹ 59,600 crore on an annualized basis.

On an average, based on this data, consumer spends have fallen by 33% since Reliance Jio’s launch. While these computations are based on Trai’s quarterly report, there are some adjustments made by Kotak’s analysts. 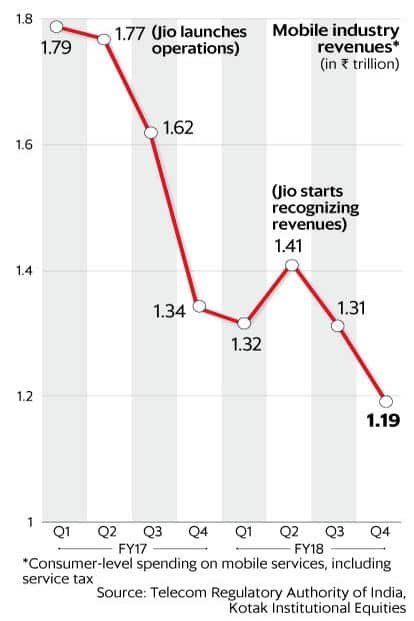 While this is a bonanza for consumers, it is a nightmare as far as profitability of the sector goes. Each of the companies in the sector is burning high amounts of cash, with revenues barely able to meet operating expenses, leave alone capital expenditure.

This means that banks with exposure to the sector can get into further trouble. Also, as mentioned earlier in this column, lower revenues for the sector mean lower collections for the government. Telecom firms pay around 12% of adjusted gross revenue to the government in regulatory fees, apart from being the goose that lays the golden egg whenever spectrum auctions are conducted. Inflows from the sector have already come down considerably for the exchequer.

Kotak’s analysts also point out that consumer-level spend on wireless services fell to as low as 0.66% of nominal gross domestic product, compared to 1.2-1.3% pre-Reliance Jio.

“It is a new low in what was already a global-low ratio, and far below underlying spend potential," the analysts said in the note.

What is Reliance Jio’s share of the telecom market?: Most analysts expect Jio, Bharti Airtel Ltd and the Vodafone-Idea combine to corner 30-32% of the market each, with the remaining in the hands of public sector companies. But the pace at which Jio is headed towards that number is clearly taking most people by surprise. (read more)

Reliance Jio’s 2021 vision is looking increasingly blurry: In March 2017, Reliance Jio Infocomm Ltd had said that India’s mobile market will be ₹ 3 trillion in size by 2020-21, adding it is well-positioned to achieve a market share of more than 50%. But Reliance Jio’s own actions point to a singular focus on market share, with little regard for where the industry ends up in terms of revenues. (read more)