Retail: Some carts are more loaded than the others

While Titan gained in terms of market share and revenue growth, results of Avenue Supermarts and Shoppers Stop were not as exciting

Gold jewellery was in vogue in the September quarter. Titan Co. Ltd’s last quarter financial results show that. Its jewellery business, which contributed about 79% of its September quarter total stand-alone revenue, surprised positively on many counts. The business performed remarkably well and saw a 36% year-on-year (y-o-y) revenue growth, helped by the fact that the festive season was ahead this year, compensating for lower sales in July.

“New customers accounted for 50% of the customer base which implies market share gains," pointed out Ambit Capital Pvt. Ltd in a report on 4 November. Titan said in its investor presentation that wedding jewellery and high-value studded categories are growing very well and have contributed significantly to market share gains.

Investors were visibly ecstatic. Titan shares closed about 19% higher on 6 November in reaction to the results announced after market hours on the previous trading day. 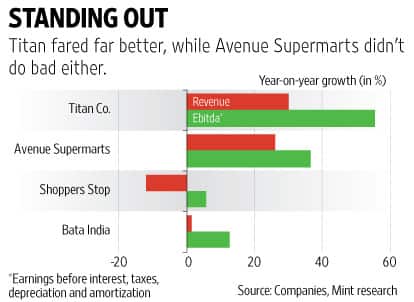 Results of Avenue Supermarts Ltd, another biggie in the retail sector, weren’t particularly exciting. The imposition of the goods and services tax (GST) impacted y-o-y revenue growth, which came in at 26%, lower than the 35.7% in the June quarter. However, net profit rose 65%, thanks to a jump in other income and a drop in interest costs as the company utilized a portion of its initial public offering (IPO) proceeds to pay off some portion of its debt. While the stock has declined from its closing high on 12 October, valuations continue to remain expensive, thanks to the sharp run-up in the shares since its listing on the bourses.

Shoppers Stop Ltd’s September quarter results did not excite either. In the June quarter, the firm had reported an impressive 19.8% like-to-like sales growth, helped by the advancement of its discount sale season by five days in June, substantially boosting sales in the first quarter. This had moderated expectations for the September quarter. Still, Shoppers Stop’s 5.5% like-to-like sales decline was worse than expected.

Like-to-like refers to growth at stores in operation for at least a year.

Shoe maker Bata India Ltd reported a mixed set of September quarter numbers wherein revenue was below ICICIdirect.com’s estimates, while profitability was above estimates. A higher proportion of value added products in the revenue mix and controlled operational cost led to Ebitda margin improvement of 110 basis points year-on-year to 11%, pointed out ICICIdirect.com in a report on 16 November. Ebitda is short for earnings before interest, taxes, depreciation and amortization. One basis point is 0.01 percentage point. So far this fiscal, all the above shares have fared well. In general, an improvement in consumer sentiment leading to better and sustained consumer demand would go a long way in keeping these stocks in fashion.