The interest coverage ratio (ICR) of Indian non-financial companies declined further in the September quarter compared to the June quarter. ICR, which measures the ability of businesses to service their interest costs, stood at 5.4 times, falling from 5.63 times in the previous quarter, showed data from CARE Ratings Ltd. The sample size of this analysis was 3,160 companies, excluding banks and financial institutions.

A low ratio means that a company is less capable of meeting its interest obligations from operating earnings. The ratio is derived by dividing a company’s Ebitda (earnings before interest, tax, depreciation and amortization) with its interest cost. 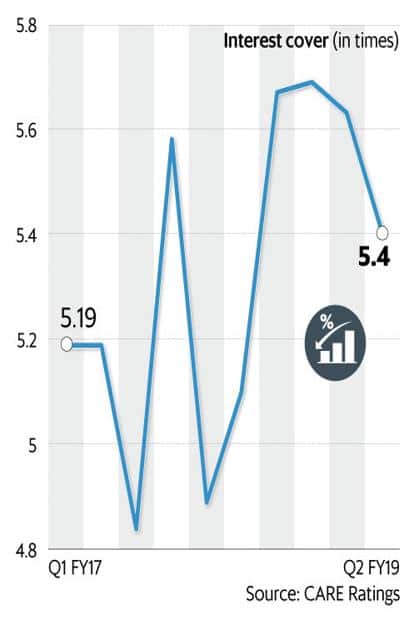 Hardening of interest rates, cost pressures and increased tax burden amid weak pricing power could be responsible for a declining ICR.

It should be noted that the Reserve Bank of India (RBI) hiked the repo rate by 50 basis points during the second quarter of the fiscal year. One basis point is one-hundredth of a percentage point.

As for input costs, margins of many companies were hit by a double whammy of rising crude oil prices and a depreciating rupee. So, that may also have had a marginal impact on India Inc.’s ICR.

Although ICR at 5.4 times for the September quarter was slightly better than the 5.1 times seen in the year-ago period, the outlook is not encouraging.

That is because while oil prices have eased and the rupee is stabilizing, the pain on operating margins front may not be over yet. In an environment of global monetary tightening, if RBI was to raise interest rates again, it would exert some pressure on ICR, pushing it further down.

It is no wonder then that consensus estimates of the Nifty earnings per share for the forthcoming fiscal year are heading southwards.