Jet Airways (India) Ltd’s shares lost 8% on Tuesday, a day the S&P BSE Sensex ended marginally higher. On Monday, after the markets closed, the company spoke to analysts about its journey and transformation over fiscal 2015-2018. It also conveyed its strategic growth plans for fiscal 2019 and beyond, where enhanced focus on cost reduction was a key takeaway. 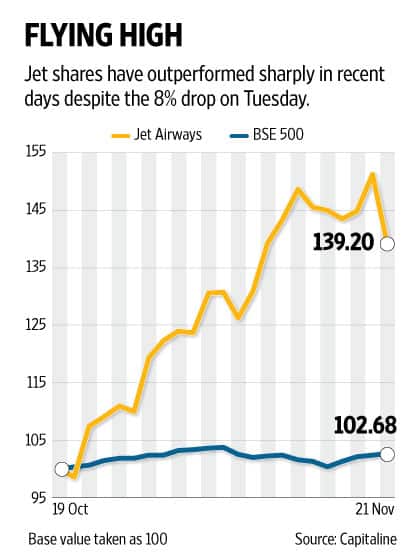 Jet Airways said in its investor presentation that it is aiming to reduce its non-fuel CASK by 12-15%. This will be achieved through a number of measures including maintenance cost reduction, reduction of sales and distribution costs, continuous productivity enhancement and better fuel efficiency on over 25 B737-Max aircraft, inductions of which will commence June 2018 and go on till March 2020. CASK stands for cost per available seat kilometre and is a commonly used measure of unit cost for airlines.

According to Ansuman Deb, an analyst at ICICI Securities Ltd, the fact that the company plans to structurally reduce costs is a positive thing. “Jet’s relatively high-cost structure meant that there is a scope for cost reductions and the airline seems to be working for that now," added Deb.

Why did the Jet stock tank then? Perhaps owing to two reasons. One, these changes are not going to happen overnight. According to Deb, the cost savings essentially means that company can move from 15-16% to 19-20% Ebitdar margin if the proposed cost reductions bear fruit. Ebitdar is earnings before interest, depreciation, amortization and lease rentals and is a key measure of profitability for airlines. “However, since it will only start to accrue in 2019, it is still some time before the margin expansion starts happening on ground," says Deb.

Secondly, Jet shares have run up phenomenally in recent days. Until Monday, the Jet Airways stock had jumped as much as 50% over the last one month. News flow that Air France-KLM is planning to create a joint venture with Jet Airways, which will give the latter vast exposure to western traffic, is said to be the major reason for optimism. According to an analyst, it is possible that the market was expecting an announcement on that front and investors are disappointed that Jet hasn’t declared anything on that.

Currently, the Jet stock trading at 15 times next year’s estimated earnings, based on Bloomberg data, appears to be discounting most of the good news after the recent outperformance. Further, debt is a big worry for Jet Airways. And more crucially, crude prices are on a firm footing these days, which is not good news for the sector.