London: European shares rose on Thursday but ended well off a session peak as the upbeat mood sparked by a Chinese rate cut ebbed after comments from the head of the US Federal Reserve gave few hints further monetary stimulus was imminent there.

The FTSEurofirst 300 nevertheless provisionally closed up 1% at 983.81, its highest close since 29 May and continuing a bounce from oversold territory which began on Monday.

An earlier improvement in market sentiment was partly down to China cutting interest rates for the first time in four years, but Federal Reserve chairman Ben Bernanke’s congressional testimony disappointed those keen for clues about the prospect for a third round of Fed bond buys.

“We look less at fundamentals at the moment and just watch basically what central bankers and governments say. What Bernanke said today is probably not what the markets had hoped for," Philippe Gijsels, head of research at BNP Paribas Fortis Global Markets, said.

“But it’s an ongoing process. It doesn’t mean it’s the end of the world... it just makes for a very volatile and nervous environment." 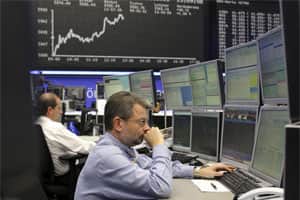 “We have seen some bottom picking and the rally has been on hope rather than firm action, but June looks to be a vital period for investors and actions around Greece’s (17 June) election could help decide the medium-term direction of the market," Jimmy Yates, head of equities at CMC Markets, said.