OTHERS : Mumbai: Indian benchmark indices declined on Thursday, halting a seven-day long winning streak, as stocks across the world fell after US Federal Reserve hinted more rate hikes ahead. Metal stocks were the worst hit as prices of most dollar-denominated metals fell after the US said it would withdraw sanctions on Russian aluminium producer. Finance and energy stocks were also under pressure. However, gains in pharma, auto and select private banks limited losses. The Indian rupee rebounded from its morning low and gained for a fourth session against the US dollar supported by falling oil prices.The BSE Sensex closed 52.66 points, or 0.14%, down at 36,431.67, and the Nifty 50 ended 15.60 points, or 0.14%, lower at 10,951.70. Intraday, the Sensex fell 281.43 points to a low of 36,202.90, and the Nifty 50 declined 87.25 points to 10,880.05.The BSE midcap and smallcap indices rose 0.07% and 0.12%, respectively. Among the sectoral indices on BSE, auto, industrials, capital goods, and oil and gas posted gains. Telecom, consumer durables, power, basic materials and FMCG declined most.In global markets, stocks fell in Europe and Asia as investors expressed concern about a lack of relief from the Federal Reserve’s monetary tightening. Oil prices fell over 2% amid worries about oversupply and the outlook for the global economy. Here are the highlights from the markets:

Container Corp shares down after board recommends bonus issue

Container Corporation of India Ltd said its board of directors recommended issue of bonus shares in 1:4 ratio. Shares traded 0.5% lower at Rs 663.80 per share.

The Indian rupee on Thursday weakened marginally against the US dollar, tracking losses in Asian currencies after the US Federal Reserve raised interest rates, but was not as dovish in its outlook for 2019 as some traders had anticipated. The Reserve Bank of India’s MPC minutes that showed higher inflation and downside risk to growth also dampened the sentiment. At 9.15am, the rupee was trading at 70.54 a dollar, down 0.19% from its previous close of 70.40. The currency opened at 70.66 and touched a high and a low of 70.53 and 70.68 respectively.

Oil prices fell on Thursday to erase most of their gains from the day before, resuming declines seen earlier in the week amid worries about oversupply and the outlook for the global economy. The front-month U.S. crude contract had dropped more than $1, or 2.24 percent, to $47.10 per barrel by 0423 GMT, offseting gains of 96 cents chalked up on Wednesday. International benchmark Brent crude futures were down over $1, or 1.82 percent, at $56.20 per barrel, after climbing almost 2 percent the session before. 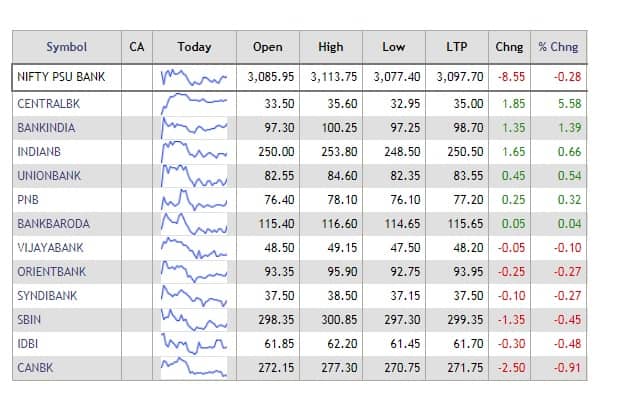 Reliance Securities: “We believe Persistent’s long-term business direction remains on track, with focus on 3 key verticals - Healthcare, BFSI and MFG through 4 major services including Data, Artificial Intelligence (AI) & Machine Learning (ML), Cloud, Security and Internet of Things (IoT). We are enthused with renewed focus on specific growth areas and verticals, and appointment of new MD, which could be a key stock driver.” The brokerage has “Buy” rating, with a target price of Rs 760.Reliance Securities: The brokerage upgraded the stock to LONG from ADD, with a TP of Rs 687 per share. “Reasonable valuations and potential capital allocation remain key supports of our upgrade while weak execution (both on revenue and margins) and potential business disruption due to change of guard are key risks.”Motilal Oswal reiterates “Buy” rating with a target price of Rs 750. “The new leader is likely to be more sales oriented than technology centric. However, there is little probability of any significant changes to the strategic course undertaken by the company.” It added, “Despite identifying trends in Digital before anyone else, the challenge faced by the company in sales execution has been one of breaking into Enterprises, while having the mindset of selling to ISVs. Building a virtuous network for successful sales continues to be work in progress for Enterprise segment.”Edelweiss Securities maintained “Buy” with a TP of Rs 775. “We believe the services business would post mid single digit growth while the digital business should accelerate to >20% YoY. Besides, the worst is behind in Accelerite and the Alliance business is on a strong footing. At the same time, demand environment continues to be robust and Persistent is addressing execution challenges.”

Shares of Om Metals Infraprojects Ltd jumped as much as 18.9% to Rs 41.5, their biggest intraday pct gain since September 21, 2017. The infrastructure facilities provider received an EPC contract worth Rs 615 crore from water resources department of Rajasthan. More than 337,837 shares change hands, compared with the 30-day moving avg of 30,614 shares. The stock hit highest since June 26. Reuters

Omkar Speciality Chemicals said it has received its seventh process patent from the Intellectual Property India to produce Halquinol. Shares traded 4.97% up at Rs 25.96 per share.

Vakrangee Ltd said it has launched domestic money transfer service in partnership with Eko India Financial Services Pvt Ltd through its nation-wide network of Nextgen Vakrangee Kendras. Vakrangee shares rose as much as 3.2% to Rs 37 per share.

Rcom shares rose as much as 3% to Rs 14.68 per share. PTI reported that senior officials of Reliance Communications and Reliance Jio on Wednesday met Telecom Secretary Aruna Sundararajan to resolve issues flagged by the Department of Telecom (DoT) around payment related to the spectrum sale deal between the two firms. The DoT maintained its stance that the deal cannot be cleared unless it gets clarity on payment of dues and associated charges, added the report, citing sources. RCom stock fell over 9% in the previous day’s trade. Shares of Reliance Jio parent Reliance Industries traded 0.92% down at Rs 1126.65 per share.

Shares of Religare Enterprieses Ltd rose as much as 2.03% to Rs 32.70 after the company said its subsidiary filed a criminal complaint against the Singh brothers, former promoters of the parent, and their associates for allegedly siphoning and misappropriating Rs 740 crore.

The rupee weakened marginally against dollar, tracking losses in its Asian currencies after the US Fed raised interest rates, but was not as dovish in its outlook for 2019 as some traders had anticipated. At 9.15am, the rupee was trading at 70.54 a dollar, down 0.19% from its previous close of 70.40. The currency opened at 70.66 and touched a high and a low of 70.53 and 70.68 respectively. The government 10-year bond yield was at 7.24% from its Wednesday’s close of 7.22%. So far this year, the rupee has declined 9%, while foreign investors have sold $4.44 billion and $7.34 billion in the equity and debt markets, respectively.

Rupee’s rally may extend into 2019 as oil prices sink

The slump in crude oil prices and hopes of a slowdown in the pace of tightening by the Federal Reserve mean the high-yielding currency may resume its winning ways next year, strategists say. The rupee jumped 2.1 percent over Monday and Tuesday, its biggest two-day gain since September 2013, before ending little changed on Wednesday. The rupee will end 2019 at 71.15 per dollar, according to the median estimate in a Bloomberg survey of economists. Here are some more comments from strategists:Nomura ( Dushyant Padmanabhan)Risks include a sharp rise in oil, potential for slowing of capital inflows ahead of the general elections and if local challenges ranging from the NBFC issue or discord between the RBI and government re-emerge RBI will probably absorb some of the heavy capital inflows, although the impetus for them to aggressively accumulate reserves is not as high as others in the region as their draw-down in FX reserves last year was relatively small USD/INR forecast for four quarters -- 70, 68.5, 68, 67ANZ ( Khoon Goh, head of Asia research)Most of the external headwinds for INR weakness not expected to be present next year Retreat in oil prices and a pause in Fed hiking cycle seen outweighing local concerns, resulting in a resumption of foreign portfolio inflows INR will regain lost momentum, but much of it will come post elections USD/INR forecasts for four quarters -- 71.2, 70.50, 70, 69.80Emirates NBD (Aditya Pugalia)Without taking into account election results, INR should gradually appreciate over 2019 Expect 4Q 2018 trend of easing oil prices and USD to continue. Local factors will continue to remain favorable with benign inflation and improving growth USD/INR forecasts for four quarters -- 71, 69, 69, 68Rabobank ( Hugo Erken, senior economist)Number of developments bode well for INR in the short term; expect it to bottom out to 69.1 in May Inflation has been surprising on the downside and Fed has softened its tone Expect BJP to win sufficient seats for a majority with partners; it may have to resort to coalition-based politics, which will likely stall business-friendly reform agenda USD/INR forecast for four quarters -- 70.8, 69.3, 70 and 70.4. Bloomberg

Oil prices fell to erase most of their gains from the day before, resuming declines seen earlier in the week amid worries about oversupply and the outlook for the global economy. The front-month U.S. crude contract had fallen 78 cents, or 1.6%, to $47.39 yuan per barrel, nearly offseting gains of 96 cents chalked up on Wednesday. International benchmark Brent crude futures were down 66 cents, or 1.2%, at $56.58 per barrel, after climbing almost 2% the session before.Gold steadied, after declining about half a percent in the previous session as the US Federal Reserve did not deliver as dovish a statement as some investors had expected. Spot gold was up 0.1% at $1,244.41 per ounce. Prices slipped about 0.5% on Wednesday, in their sharpest decline since Nov. 27. US gold futures declined 0.7% to $1,247.4 per ounce.Metals: London aluminium prices sank to a 16-month low in early Asian trade after the United States said it would withdraw sanctions on Russian aluminium producer United Company Rusal. Three-month LME aluminium stood at $1,910 a tonne. The most-traded February alumnium contract in Shanghai slipped by 0.4% to $1,974.37 a tonne. LME copper slipped 0.2% to $6,003.50 a tonne having gained 0.8% in the previous session on hopes a pause in Fed rate hikes would boost demand. Reuters