Home / Opinion / Should BSE feel short-changed in the CAMS deal?

Should BSE feel short-changed in the CAMS deal?

Whichever side of the debate one may be, it's difficult, prima facie, to not sympathize with BSE

BSE Ltd is often found ranting about the stepfatherly treatment it gets from India’s policymakers. The argument goes that the National Stock Exchange (NSE) gets preferred treatment because its creation was initiated by the government; whereas BSE, created by brokers over a hundred years ago, is perceived as a lowly being.

Whichever side of the debate one may be, it’s difficult, prima facie, to not sympathize with BSE in the latest conflict between the two exchanges. In 2010, BSE was interested in buying a 51% stake in Computer Age Management Services Pvt. Ltd (CAMS), a provider of transaction processing and customer care services mainly to mutual funds. But according to news reports, Securities and Exchange Board of India (Sebi) felt that the acquisition of a market intermediary by a stock exchange would pose conflicts of interest. BSE walked away, only to find a little over three years later that NSE has struck a deal with two of CAMS’ shareholders to buy a 45% stake.

Sebi’s stand on the deal is not yet known, though if it goes through, BSE might well be justified in concluding that it was short-changed. (While this reporter was able to confirm that Sebi did have reservations about the BSE-CAMS deal, it’s not very clear if that was the only reason the exchange had walked away from the deal.)

From NSE’s perspective, it can be said that there is no public record of an explicit disapproval by Sebi. Also, when Sebi listed out new guidelines for stock exchanges in mid-2012, it attempted to address various conflicts of interest, but left out ownership of transaction services providers from its list of objections. Besides, the operations of transaction services providers and their main customers, mutual funds, aren’t directly regulated by stock exchanges; so the purported conflict of interest is not that evident.

So, in sum, Sebi can be blamed for the current confusion, although it must be said here that the people who objected to BSE’s deal with CAMS have long been replaced since they finished their respective terms. Even so, it’s clear that the regulatory uncertainty in such transactions can and will result in chaos. The episode should result in a rethink on policy related to stock exchanges. Sebi shouldn’t be so prescriptive that even the faintest hint of any conflict results in a clampdown.

Will equity derivatives rule the roost in 2014 as well?

It’s clear that regulators influence the performance of India’s exchange-traded markets to a large extent. 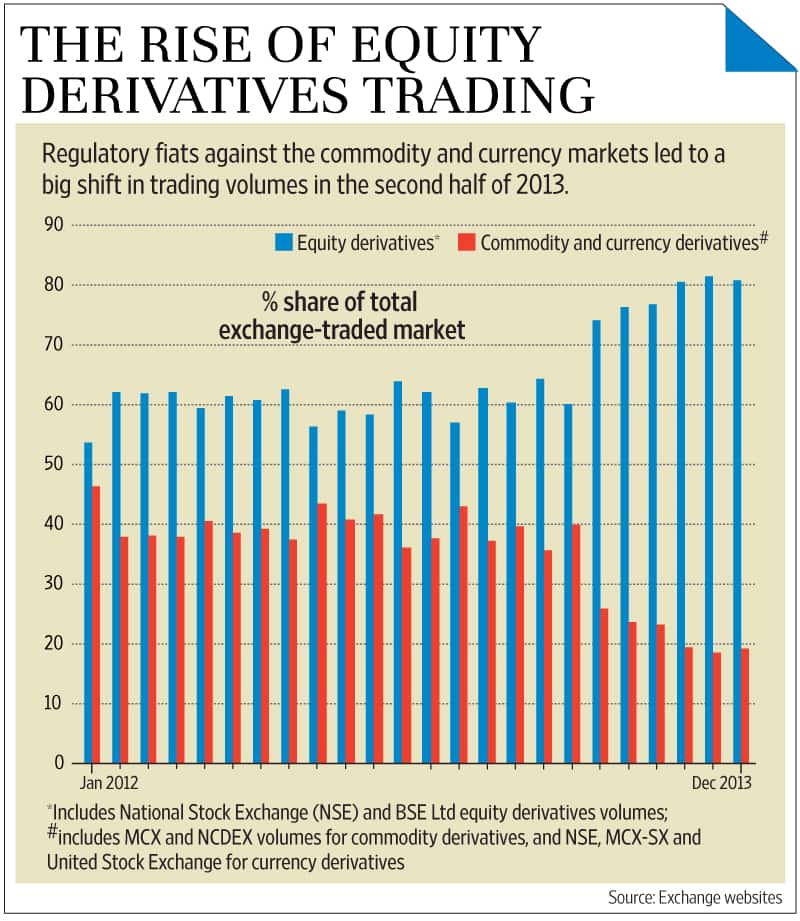 The finance minister addressed this skew to some extent, introducing a commodity transaction tax as well as reducing the rate of tax for equity futures transactions in the budget for financial year 2013-14. While this has had some impact on volumes across exchanges, the big impact, of course, was due to the National Spot Exchange Ltd scam and the resultant impact on volumes of exchanges owned by Financial Technologies (India) Ltd. In addition, Forward Markets Commission raised the margin requirements for key commodity futures contracts. All of this led a sharp drop in monthly average volumes of Multi Commodity Exchange of India Ltd from 12.2 trillion in the first six months of 2013 to around 4.3 trillion in December.

Besides, the central bank clamped down on currency derivatives trading, resulting in a drop of around 70% in trading on the three exchanges that trade currency products. Equity derivatives were largely untouched, except that futures contracts benefited marginally owing to a reduction in transaction tax rates. By December 2013, equity derivatives enjoyed an 80% share of total exchange-traded derivatives volumes in India, up from around 60% a year ago.

While the clean-up in the commodity markets is welcome, policymakers should now work towards increasing participation in this market. The government should also work quickly in empowering Forward Markets Commission, so that concerns about regulatory arbitrage are addressed. One would also hope that the central bank’s new governor will take a pragmatic approach and encourage exchange-traded currency markets.

Sure, all of this will result in a drop in the share of equity derivatives trading; but clearly it will be much more desirable to have all-round growth in India’s exchange-traded markets.