"storyDirectUrl"
OPEN APP
Home / Market / Mark-to-market /  Will the govt be able to defy history and carry out massive disinvestment?

Will the govt be able to defy history and carry out massive disinvestment?

Fiscal deficit at 45.6% of the budgeted estimates as of May, highlights the need for the govt to raise more revenue

The fiscal deficit has already widened to 45.6% of the budgeted estimates as of May, according to data released by the finance ministry, highlighting the need for the new government to raise more revenue. The obvious way to do that is to sell the government’s stake in state-controlled companies. There are expectations that the Narendra Modi government may raise the divestment target to as much as ₹ 80,000 crore in the upcoming budget by slicing off stakes in state-run companies to meet the revenue shortfall. The historical record, however, shows that this may be a rather optimistic estimate.

While the equity markets are upbeat, with the BSE benchmark Sensex rising around 20% since the beginning of the year, even in the best of times, the maximum the government could raise through the divestment route was around ₹ 38,800 crore in 2007-08. Moreover, an analysis of data over past two decades shows that the government has missed the divestment target 17 out of 24 times. In the last four years alone, the government shortfall from divestment has averaged around 40%. 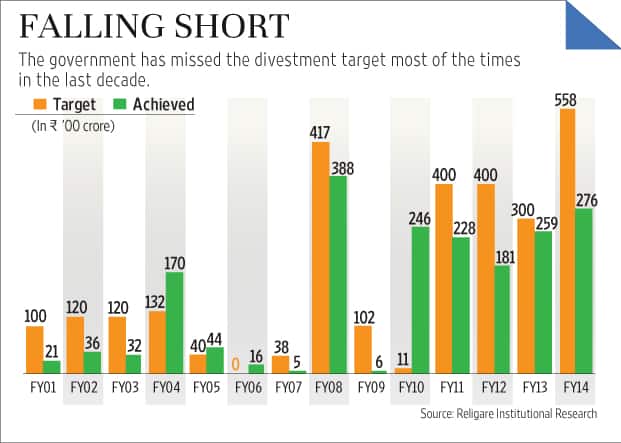 The previous governments were unable to sell stakes because of poor market sentiment and opposition from the companies and the unions. With the Bharatiya Janata Party (BJP) winning a strong mandate in the recent elections, market sentiment has improved. The new government can also ignore objections from vested interests.

The Religare report points out the need to raise funds to recapitalize banks. It says: “Our analysis shows that 22 non-bank PSUs (listed and tradable) have Govt. holding of more than 75%, which if reduced to 75% as per Sebi guidelines would help the Govt. generate ~ ₹ 558bn. Further, reduction in Govt. holding to 51% in a total of 22 PSU banks (with holding of more than 51%), as per the Nayak Committee recommendations, would result in revenue generation of another ₹ 518bn." Religare estimates that divestment for the current fiscal will be around ₹ 60,000 crore.

Nevertheless, we need to wait and watch whether upbeat sentiment translates into enough demand to soak up such a large increase in the government’s divestment programme.