Operating margins decline to 17.5% in the October quarter from 18.2% in the previous quarter

MphasiS Ltd’s shares declined 1.61% on Friday following its results announcement due to a bleak growth outlook. Emkay Global Financial Services Ltd, after the earnings announcement, cut its earnings growth estimate by 8-10% for the next year, citing challenges in achieving revenue growth and pressure on margins.

The company, owned by Hewlett-Packard Co. (HP), which is also its largest client, continued to see slower sales growth, down 2.6% in dollar terms sequentially during the August-October quarter. That’s after declining 4% in the previous quarter. The HP business, which contributes around 40% of MphasiS’s overall revenue compared with 54% during the same period last year, may remain under pressure because of tight budgets and project ramp-downs.

Revenue from the direct business also grew at a slower pace—0.6% in dollar terms compared with a strong 9.9% growth in the previous quarter because it exited loss-making government of India contracts. Digital Risk, a US mortgage management firm MphasiS acquired last year, aided in volume growth as it won a $101 million deal in July and another $102 million contract in November, say analysts. 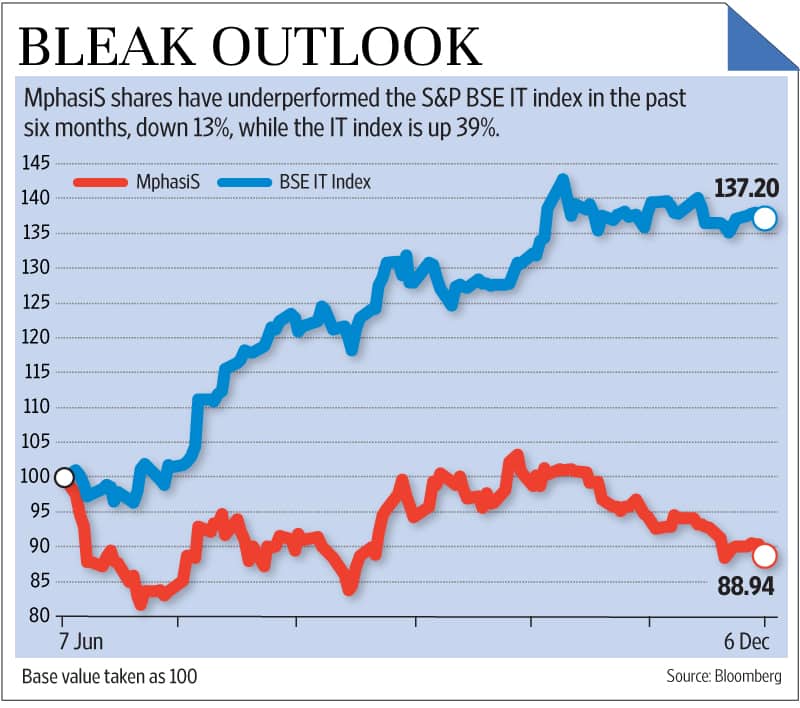 Operating margins declined to 17.5% in the October quarter from 18.2% in the previous quarter, a consequence of the sluggish revenue growth.

It isn’t surprising then that MphasiS shares have underperformed the S&P BSE IT index in the past six months, down 13%, while the IT index is up 39%. While the stock is trading at cheap valuations of 10 times 2013-14 price-to-earnings multiple, any upside is unlikely unless it steps up revenue growth.